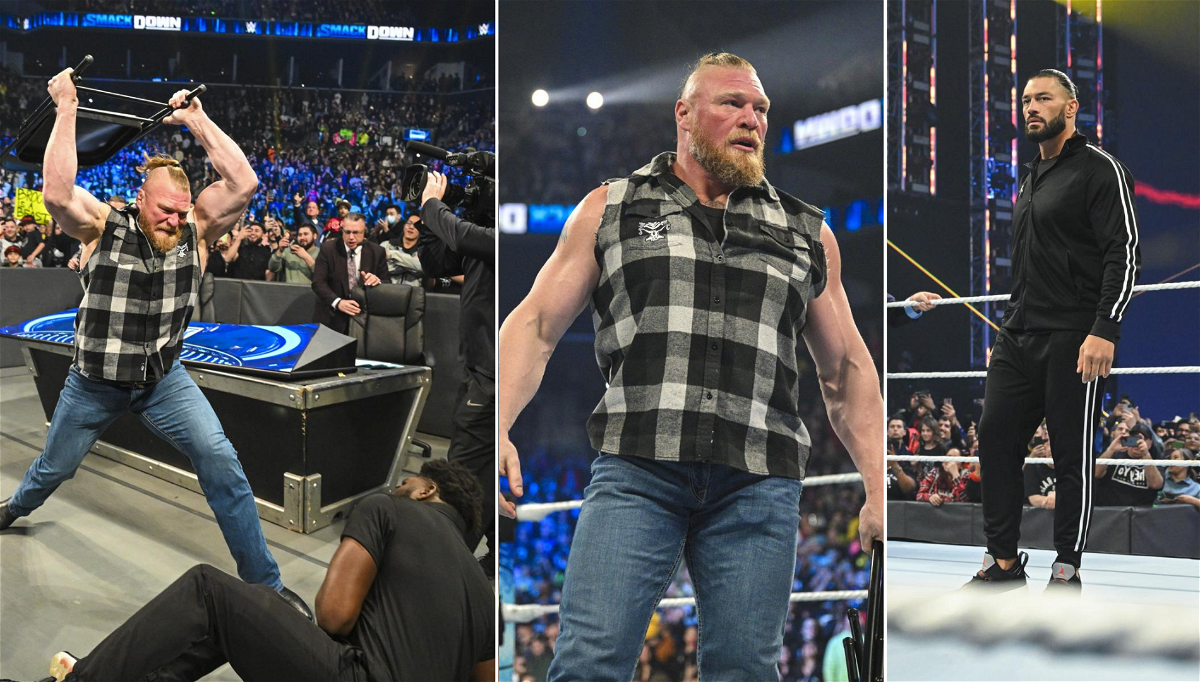 The rivalry between Brock Lesnar and Roman Reigns is heating up. Last night on the penultimate SmackDown before WrestleMania 38, The Beast Incarnate was determined to get some blood, the blood of the Tribal Chief. A lot happened, let me run down everything and you can read and watch what exactly happened and how things will go forward.

Thus the management let Brock know, that if he attacks Roman Reigns, unprovoked then there will be serious consequences.

SmackDown kicked off with the Beast Incarnate standing outside Roman Reigns’ locker room. Kayla Braxton asked Lesnar why and the Beast replied, “I’m here to do some provoking“. He then walked into the locker room and practically ransacked the place.

Brock ate some grapes and then as he sat down, he put both his legs on the table and that shattered the desk into pieces. It was hilarious to watch.

Later in the night, we have a video package courtesy of the Tribal Chief, Roman Reigns and his Special Counsel, Paul Heyman. Heyman and Reigns mentioned that they were having a tour around Brooklyn and Reigns even mentioned they stopped by Madison Square Garden. The same place where Roman Reigns brutally attacked Brock Lesnar. Roman Reigns then sent out a warning to his WrestleMania opponent. Reigns asked Lesnar to leave his locker room by the time he arrives and if not then it would be the same scenario as MSG.

.@WWERomanReigns is NOT happy that @BrockLesnar has taken over his locker room.

The Head of the Table is on his way to #SmackDown! @HeymanHustle pic.twitter.com/XxjxCNdy0T

Kayla Braxton quickly went over to Lesnar and mentioned to him the warning from Roman Reigns, and the Beast asked Kayla to request Roman to come fast because he is running out of things to smash.

Finally, the Tribal Chief arrived at SmackDown. Reigns instantly went to the ring along with the Bloodline. Roman mentioned that Brock is a coward, and then we saw Brock holding an axe and smashed Roman’s SUV. But the beast was not done. Lesnar came out through the crowd and then destroyed the security guards and chased Roman Reigns out of the building.

Things are heating up between the Beast and the Tribal Chief. Cannot wait for their match at WrestleMania. Both stars are training hard for their match and I can guarantee that it will be their best match yet.

Who do you think will win this match? Share us your predictions.