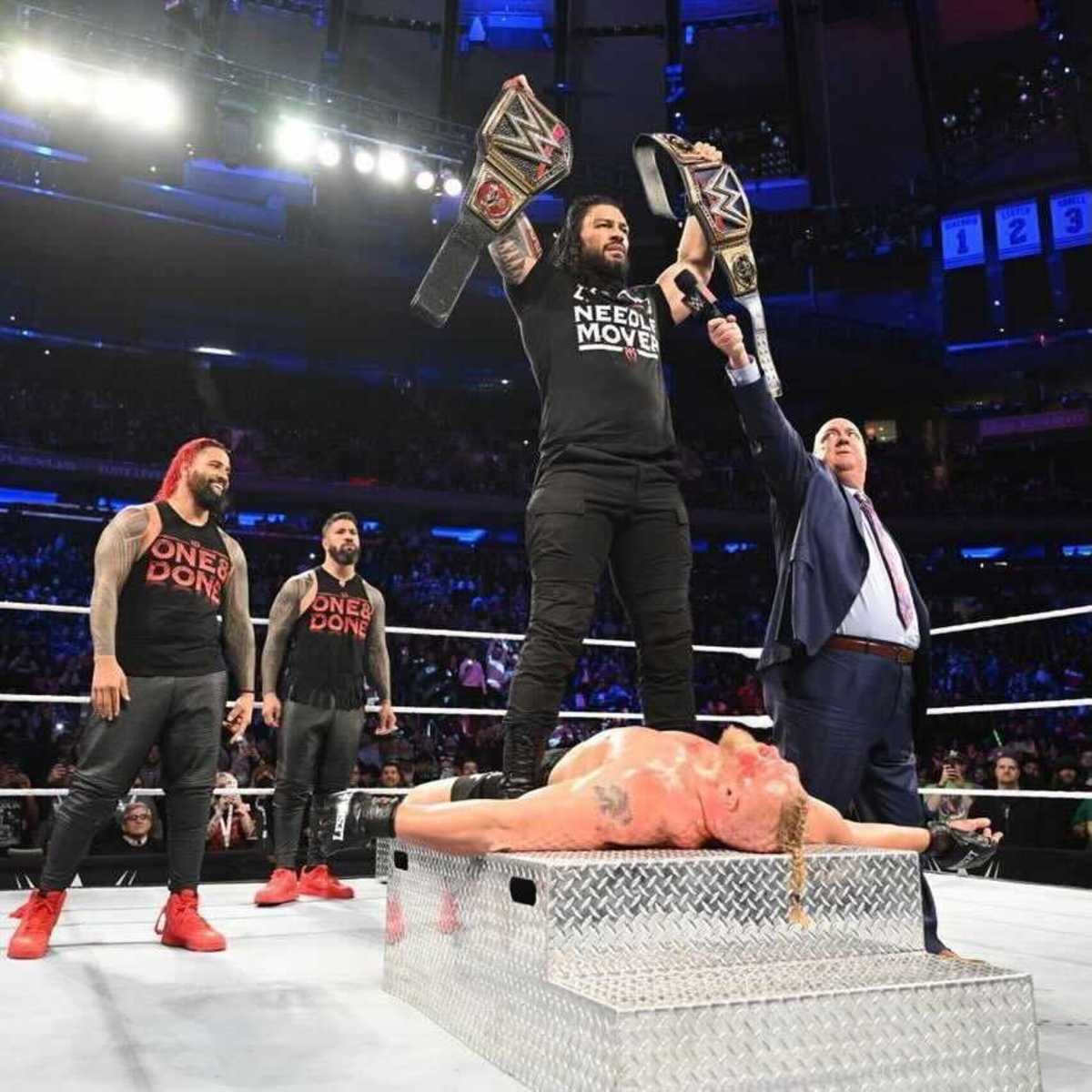 The Tribal Chief might just have teased the results of WrestleMania 38’s main event last night. After defending the WWE Championship in an exciting match-up with Austin Theory, Brock Lesnar was left a bloody mess in the ring by Roman Reigns. And if the post-match visual is anything to go by, this isn’t the last time that Reigns will be standing triumphant over the prone body of The Beast.

Lesnar has a history of juicing up matches, “hard way”

WWE is notorious for getting bloodshed scrubbed off its tapes thanks to its PG-TV status. They’ve gone so far as to rename The Brood’s iconic bloodbath to…The Broodbath. Cute. But if there is one person who has constantly gotten away with drawing color in the Big Dub, it’s Big Brock Lesnar.

From the time he made his return to the company in 2012, The Beast has employed blood in his biggest matches to really sell the spectacle of the event. He infamously bladed at ‘Mania 31, and has caved in the heads of both Randy Orton and Roman Reigns in main event matches just to prove how big of a threat he is. But while most Lesnar blade-jobs have made him look strong in defeat, this wasn’t the case last night.

The Head of the Table proved, once again, why he’s the Needle Mover in WWE. As the main event of the Road to WrestleMania 38 Live Event was reaching its conclusion, it became clear that Brock Lesnar would enter WrestleMania 38 as WWE Champion. But as The Beast Incarnate was celebrating his win over Austin Theory, Reigns’ music hit.

Out came The Tribal Chief to revel in the spotlight he owns. The Bloodline executed a surgical strike on Lesnar, cracking him open with a chair shot and making him bleed all over the canvas. The closing shot of the Madison Square Garden event saw Reigns towering over a spent Lesnar, hoisting up both titles with a chorus of boos serenading him as the show went off-air.

WWE has managed to raise the stakes for a feud that is 7 years old at this point, and kudos to them for being able to pull off compelling TV for the first time in nearly a decade. Let’s just hope that the main event of ‘Mania 38 is as hard-hitting as this closing angle was.