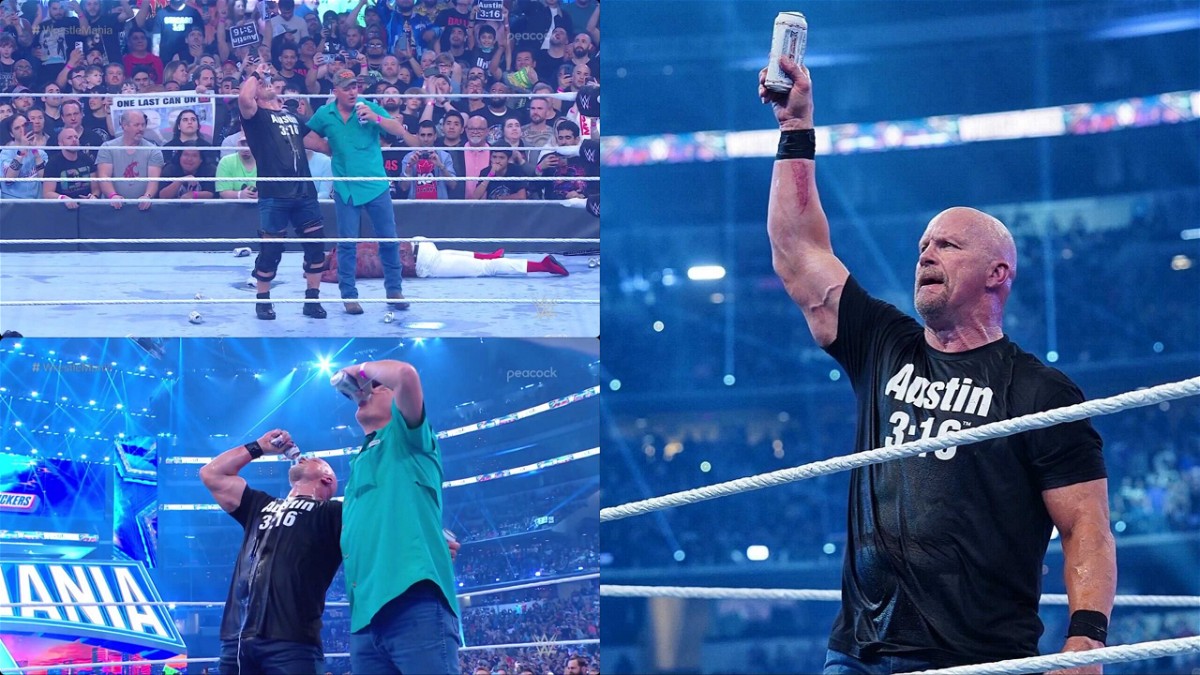 Steve Austin shares a beer with his brother at the end of WrestleMania 38, Night 1. Austin was famous for busting out beers after his matches to celebrate with the fans. He certainly kept the tradition going at this year’s ‘Mania as well.

Austin made his much-anticipated return to in-ring competition earlier in the night. It came as a massive surprise to audiences as Austin was only scheduled to appear as a guest on ‘The Kevin Owens Show.’ But Owens had other plans.

Kevin is a master manipulator and he managed to bring Austin out of retirement. Owen insulted Austin’s home state Texas and called him a coward. The Texas Rattlesnake then finally picked up the mic said his first match was in Dallas, Texas and so will be his last. The crowd went absolutely nuts in anticipation of finally getting to see Steve Austin compete in the ring.

It was certainly more than fans could have ever hoped for. The match was over 10 minutes and they brawled all over the area. Austin took a few nasty bumps which included taking a suplex on the concrete floor.

A toast for @steveaustinBSR and his brother at #WrestleMania! pic.twitter.com/Gqk1QKpApQ

A missed chair shot from Owen that bounced off the rope to stun KO. Stone Cold finally took advantage of that and hit his famous stunner to end the night. Following the match, Austin’s brother came into the ring and celebrated with beer cans flying all over the AT&T stadium.

Stone Cold Steve Austin reacts to his return at WrestleMania 38

Fans always wanted one last match from the iconic Austin 3:16 since his premature retirement in 2003. His neck injury did not allow him to wrestle any longer. But the match at this year’s WrestleMania was the perfect way for Steve Austin to end his career.

Austin did look slow in the ring. However, he is 57-years old and has been inactive for 19 years. Hence, he did look rusty while performing. But it did not matter as the audiences in attendance ate up everything that Austin did. Kevin Owens also deserves a lot of credit for selling the offence and working a match that was safe. Following the match, Austin reacted to his return and said,

“I came here looking for anything. This is where I started, I was lucky enough to finish here. KO (Kevin Owens) is outstanding. But he ran his mouth a little too much and it finally caught up with him. But, it was really an honour to be here on such a stacked card with so many great matches.”

“You just love the crowd and the guys and girls before me had so many great matches, it’s really hard to follow that. But you live and die by that crowd. And the crowd is so faithful, so loyal, so rambunctious. They’re behind everything you do.”

“So I give a shout out to the WWE superstars that worked before me, the ones that are gonna work tomorrow night, but I give the biggest shout out to the crowd. Because I never expected to be able to headline a WrestleMania at this day and time. But it’s all about the WWE Universe.“

Although the night was finished by Steve Austin, it had many big moments throughout the night. From the historic return of Cody Rhodes to Charlotte Flair beating Ronda Rousey to retain her SmackDown Women’s Championship, catch all the results here.