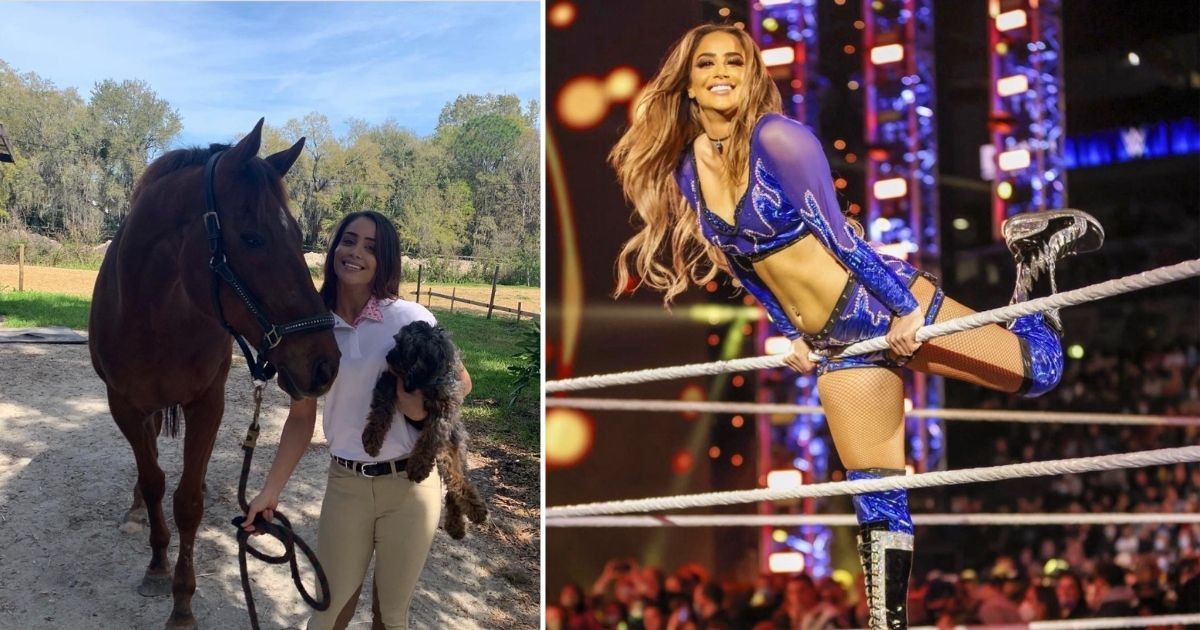 Not every WWE Superstar can claim to have broken a record set by The Rock, but 27-year-old Aliyah can. The rookie sensation has been proving herself since being called up to the main roster as part of the 2021 WWE Draft; yet, you might not have heard of her name. And that’s okay because that’s where we come in.

Here’s everything you need to know about Aliyah- the first Arabic WWE Women’s Superstar to main event SmackDown.

What is Aliyah’s ream name? – All you need to know about her personal life and family

Nhooph Al-Areebi was born on November 23rd, 1994 in Toronto, Ontario, Canada. She is a 1st generation Canadian and is of half-Iraqi & half-Syrian descent.

Yes half Syrian half Iraqi https://t.co/QwklpLuedB

Aliyah is an only child, and her parents immigrated to Canada.

Al-Areebi had a rather strict childhood, growing up in a conservative Arabic family. In a WWE.com interview conducted in 2015, she’d noted that there were “rules” she’d have to follow;

“There were certain things I couldn’t wear, no boyfriends, strict curfews. They were hard on me about school. I had to get good grades.” – [H/T – WWE.com]

The 27-year-old is active on social media platforms, yet there has been no hint of a romantic partner on any of them.

We can speculate as to why that is the case, but the one thing we cannot deny is her love for horses! Al-Areebi is a professed equestrian, and owns two majestic horses who have been featured on her Instagram quite a number of times.

Aliyah loves to breed horses and of course, ride them on the tracks. The WWE Star makes it a habit to hit the tracks as often as she can.

She may keep her personal life a secret but has always been open about the love for horses and horse-riding.

Prob my favorite picture ever taken of me pic.twitter.com/33vfxYNYA2

Aliyah has been a hard worker her entire life. She completed her high school education from St. Joseph’s College School in 2012, going on to attend George Brown College where she enrolled for a nursing course.

But despite having such academic credentials, she was also shaping her lifestyle to fit a pro-wrestling career from a young age.

Jasmin Areebi: How Aliyah got started in professional wrestling

Nhooph Al-Areebi has been a life-long WWE fan. She grew up without missing a single Raw, SmackDown or PPV event. Being a Canadian, her favorite wrestlers were her fellow Canucks Edge & Trish Stratus, though she also notes that Jeff Hardy, Lita & Mickie James were also instrumental in getting her into the WWE product.

In fact, it was the last of those names that inspired her to become a pro-wrestler in the first place. As a native of Toronto, she was a regular at Air Canada Center & the Ricoh Coliseum; both venues frequented by WWE.

Who inspired Aliyah to get into professional wrestling?

During an interview for WWE’s website, Aliyah spoke about what made her choose pro-wrestling as a profession,

“I remember the day I decided that I wanted to become a wrestler – May 5, 2008. It was my first time seeing Monday Night Raw live. I was sitting in the nosebleed seats. I remember doing so many chores and things around the house so my mom would purchase tickets. I remember watching Beth Phoenix and Mickie James, and seeing how the crowd reacted to their match. At that point, I knew I wanted to be a WWE Diva.”

So at age 14, Aliyah decided to incorporate her dream into her current lifestyle. She started attending circus training because she figured it would help her in-ring flexibility.

After graduating high school, she enrolled herself in Toronto’s Squared Circle Training school and trained to become a pro-wrestler under former IMPACT Knockouts Champion Taylor Wilde. She would also receive additional training from Rob Fuego, before going on to join the Canadian & North American independent circuits.

In 2015, she signed a developmental contract with WWE, and became a part of the Performance Center Class of 2015 alongside Apollo Crews & Peyton Royce; thought she would not get the same level of success just yet.

When did Aliyah make her WWE debut?

Aliyah made her unofficial NXT debut as part of Tyler Breeze’s entrance entourage for NXT TakeOver: Unstoppable on May 20th, 2015. It takes a full calendar year for her to re-surface on television, but she would do so on the January 12th, 2016 episode of NXT.

She debuted with an Arabic gimmick and was a part of the Number One Contender’s Battle Royal for Bayley’s NXT Women’s Championship. She ended up losing that match, with Carmella emerging as the eventual winner.

Aliyah disappeared from TV and returned 3 months later, having dropped her previous character and morphed into what we see on the main roster today.

She’d make her unofficial main roster debut in 2017, going up against Carmella yet again in a one-off appearance that introduced the WWE Universe to her.

For the next 4 years, Aliyah would cut her teeth in NXT, losing most of her matches but emerging improved from every last one of them. She formed a short-lived alliance with Lacy Evans over their mutual hatred for Deonna Purrazzo & Dakota Kai, and picked up her first NXT victory alongside her.

After Evans was called up to the main roster, Aliyah disappeared from NXT yet again, before returning in 2019 and becoming a part of the Robert Stone Brand in 2020. Despite her stop-start developmental run, Aliyah stuck it out and was rewarded with a main roster call-up in the 2021 WWE Draft.

Since joining the Friday Night SmackDown roster, Aliyah has shaken up the women’s division for the better.

Her debut appearance fulfilled a lifelong dream of hers, as she got to interact with Jeff Hardy in a backstage segment! And what’s more; she went on to win her first match as an official part of the WWE roster.

Aliyah teamed with Naomi & Sasha Banks and they ended up defeating Shotzi, Natalya & Shayna Baszler- the same woman who was ruling the NXT roost while Aliyah was still “in developmental”.

And that was just the beginning. On January 14th 2022, Aliyah created WWE history.

“Stone Cold” Steve Austin‘s infamous 3:16 speech gave WWE its best-selling t-shirt design of all-time. They might just pull off a similar feat with Al-Areebi, because on that Jan 14th episode of SmackDown, she defeated Natalya in 3.17 seconds.

This broke The Rock’s long-standing record of Fastest Single’s Win in WWE history, when he defeated the Big Boss Man in 4 seconds at the 1998 Survivor Series PPV.

On April 29th 2022, Nhooph Al-Areebi created history yet again, when she became the 1st WWE Superstar of Arabic descent to be in a main event match on WWE SmackDown- and “win” it.

Her outlasting Charlotte Flair for 1:41 mins might seem like an upset victory for Western audiences, but it is a genuine cause for celebration amongst WWE’s Middle Eastern fans.

Out of time! @MsCharlotteWWE fails to make @WWE_Aliyah say “I quit” in time to beat @RondaRousey in the Beat the Clock “I Quit” Challenge on #SmackDown. pic.twitter.com/7UVQGCyLyn

For a very long time, WWE has either ignored its Arabic fan base or directly antagonized it.

Who can forget the awful 1991 Sergeant Slaughter vs Hulk Hogan feud, where the American patriot controversially switched sides and became an “Iraqi sympathizer” in the name of cheap heat? Or the infamous Muhammad Hassan incident from the July 7th, 2005 episode of SmackDown?

Aliyah is not just one of the freshest faces in WWE’s women’s division, she is also one of its most-important faces. Her success in the company so far has already proven that when they try, they can make a superstar in an instant.

She has been given a prominent place on Friday Nights, and has been booked to perfection so far. If WWE keeps this up, they will be able to get rid of all the bad karma they have acquired from the Middle Eastern regions of their Universe, and given them a bona fide mega-star to rally around; which is, of course, what’s Best for Business.