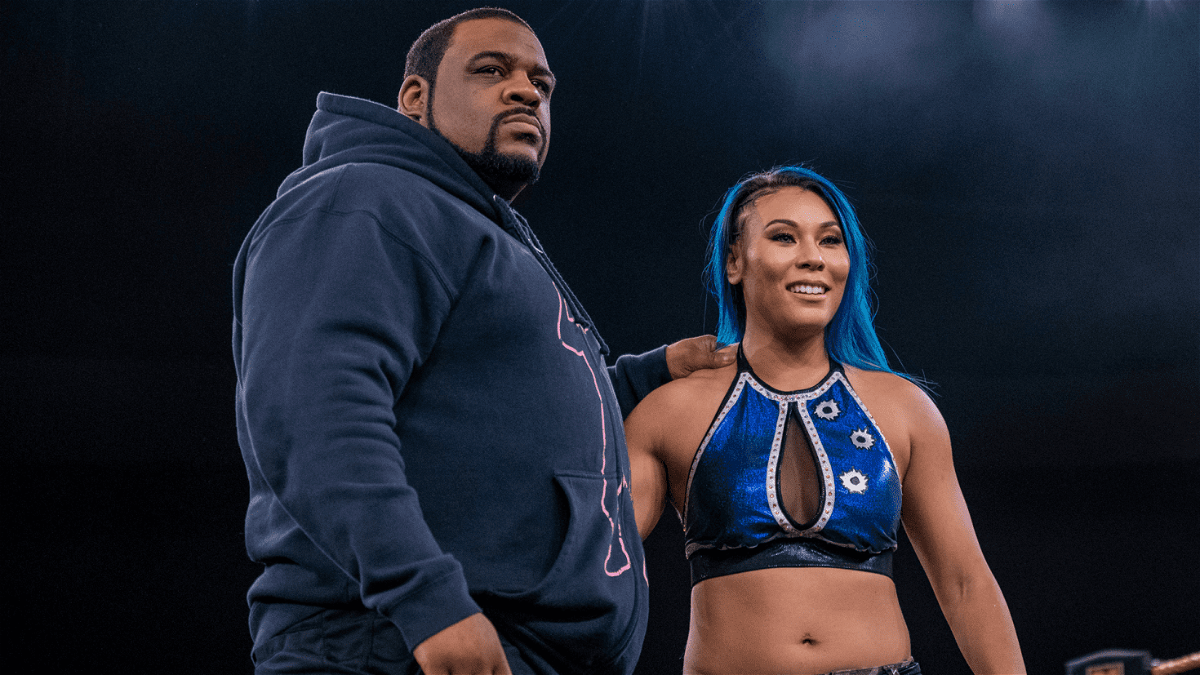 Stephanie Hym Bell or better known as Mia Yim is a professional wrestler and wife of former WWE Superstar Keith Lee. She has previously worked for well-known wrestling promotions such as WWE and TNA. During her TNA run, she became a one-time Knockouts’ Champion under her ring name Jade.

Her most recent run with WWE came to end last year in November 2021 when she was released from her contract. She is also a Twitch streamer under the name ‘ItsMeSYB.’ Yesterday news broke that Mia Yim and Keith Lee have officially tied the knot in a beautiful ceremony.

Today we take a deep dive into the life of the artist formerly known as Reckoning!

Where was Mia Yim born?

The former member of Retribution was born on April 16, 1989, in Los Angeles, California. Her father is an African-American while her mother hails from Korea. Yim attended Marymount University on a Volleyball scholarship where she studied Information Technology.

According to Mia Yim, she is very ‘ticklish’ which poses a huge problem in her wrestling career. In 2017, she tweeted a photo of her match with Mercedes which read, ‘Idk what Mercedes is doing but I don’t like it.’ Yim can be seen laughing while Mercedes holds her down in a ground grapple hold.

Idk what mercedes is doing but I don’t like it!! #ShimmerWrestling pic.twitter.com/brRCOO7Bq7

Yim started training as a professional wrestler while attending college at the age of 19. Initially, she performed for numerous independent promotions in Virginia. In 2011 she began working as a Valet for The Embassy in Ring of Honor (ROH). After graduating college, she received an invitation to train in Japan with Universal Women’s Pro Wrestling Reina. Through them, she also learned the Mexican style of LUCHA LIBRE wrestling.

In 2014 and 2015, Yim appeared in WWE as one of Adam Rose’s Rosebuds and performed as enhancement talent for NXT. After navigating the pro-wrestling industry with promotions such as CZW and Shine Wrestling, she signed with Impact Wrestling (TNA) and won the Knockouts’ Championship in 2016.

In 2017, Yim returned to WWE by taking part in the newly created Mae Young Classic. She was eliminated in the second round after she lost to Shayna Baszler. In 2018, she lost to Toni Storm in the quarter-finals of the same tournament. However, WWE was impressed with her showing and offered her to be a part of the NXT Brand which Mia gladly accepted. She made her main roster debut in 2020 as part of the failed stable The Retribution. She also changed her ring name to Reckoning as part of the stable.

Mia was released from WWE along with her husband in November 2021. Her 90 days non-compete ended last week and she is free to work for other wrestling promotions. She took to Twitter to celebrate her wrestling freedom.

Mia Yim and Keith Lee: “HappiLee” ever after

Mia Yim and Keith Lee have been in a relationship for quite a while now. They started dating before they joined WWE. Their relationship is one of the best parts of their life. Keith Lee spoke about his wife in a podcast with Lilian Garcia to which Yim tweeted, ‘He is the best.’

On February 12, 2021, the former Impact Wrestling Knockouts’ Champion took to Twitter to announce her engagement with Keith Lee.

A year later and the lovable duo tied the knot recently. The ceremony was attended by many WWE superstars such as Shelton Benjamin and Damien Priest. Yim-Lee become the latest pro-wrestling couple to get married.

Both the wrestlers are now free agents and can sign with a wrestling promotion of their choosing. AEW’s Tony Khan recently announced a big free agent signing was coming to AEW Dynamite this week. Could either or both of them be heading to AEW?

No Clear Update on Bayley’s Return to WWE – When Did Bayley Last Compete?