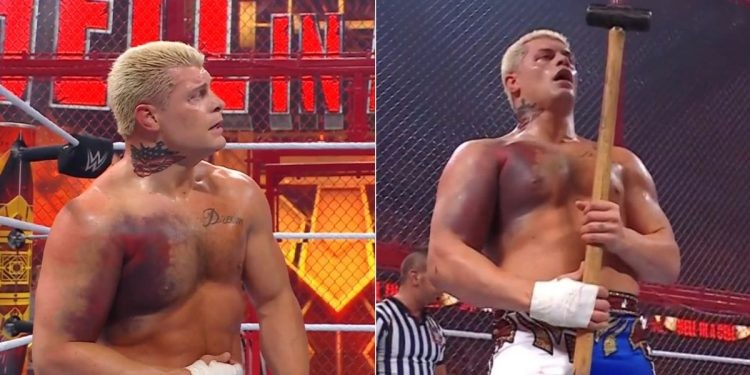 Cody Rhodes put up an incredible performance against Seth Rollins at Hell in a Cell with a torn pectoral muscle. Fans, wrestlers, and pundits have showered their gratitude on the American Nightmare as he wrestled for nearly 25 minutes inside the steel structure.

“For the love of the game.” – @CodyRhodes #HIAC pic.twitter.com/3bHlLl5UB9

Reports reveal that Rhodes wasn’t forced to compete, he insisted on doing it. Moreover, WWE will also release a documentary that will also cover his injury situation as well.

Cody Rhodes was initially reported to have suffered an injury after brawling with Seth Rollins on the go-home episode of RAW before Hell in a Cell. His injury got worse after he participated in a weight-lifting session, which resulted in his tendon being torn completely off the bone during the session.

It didn’t stop Rhodes from wrestling at Hell in a Cell. He realized that this injury could be inserted in the match for amazing spots.

WWE wouldn’t have forced him to wrestle if he didn’t want to. But he decided to go ahead anyway since there wasn’t any more damage to be done to the pectoral region of his body. The match went as scheduled, and both Rhodes and Rollins put on an instant classic. Though many spots had to be removed and changed, it did not fail to entertain the fans. It was the only Hell in a Cell match in the card.

Rhodes’ heartfelt promo after the show went off the air

The former Intercontinental Champion cut a heartfelt off-air promo for the fans in attendance. He stated that no one had convinced him to wrestle with his injury. It was his own decision. Cody also stated that he wouldn’t have changed a thing if he had the chance to go back in time to decide whether or not he wanted to wrestle the match. He expressed his appreciation to the WWE Universe at the end of the speech.

The estimated time to heal the injury is said to be at least six months. Brandi Rhodes broke the news on Twitter that Cody underwent successful surgery this past Thursday.

Fans are hoping to see Rhodes return by the time Royal Rumble starts approaching. WWE has been filming a documentary surrounding Cody’s injury, among other things. Rhodes looks ready to achieve great things in WWE since as and when he returns. We will have to wait and see what happens.