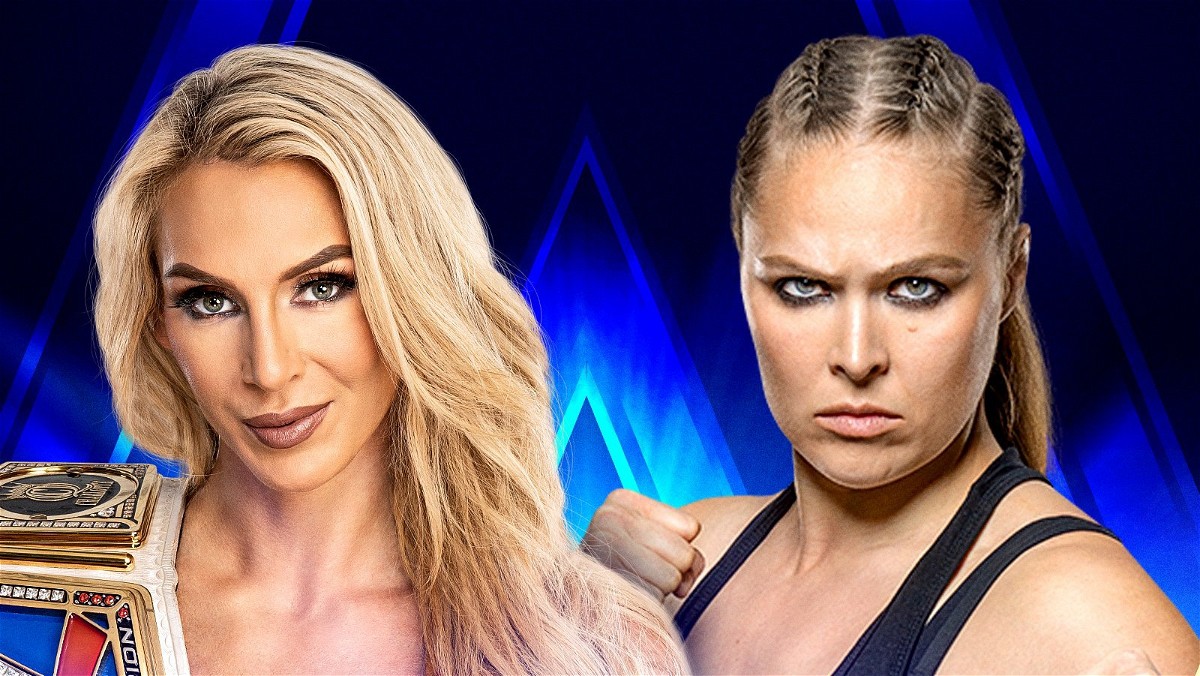 It is time for WrestleMania 38 . Similar to last year, the grandest pro-wrestling event will be a two-night bonanza. This year’s event will take place inside the AT&T arena. Several star-studded matches are scheduled to go down

Stone Cold Steve Austin is scheduled to appear in the main event on the first night. However, he is only scheduled to be a guest on the Kevin Owens Show. In another big match, Ronda Rousey will challenge Charlotte Flair for the SmackDown Women’s Championship.

Ronda Rousey returned to WWE earlier this year and won the Women’s Royal Rumble. Following her victory in the battle royal, she challenged Charlotte Flair’s belt. It is hard to predict who will win this match as Flair has a knack for winning the big matches. However, she will be going up against Ronda Rousey who has been phenomenal since her WWE debut.

The #SmackDown #WomensTitle is on the line TONIGHT at #WrestleMania as @MsCharlotteWWE defends against @RondaRousey!

Elsewhere, Becky Lynch will defend her Raw Women’s Championship against Bianca Belair. Logan Paul will make his WrestleMania debut as he teams up with The Miz to take on Rey Mysterio and Dominic Mysterio. SmackDown Tag-Team Championships will also be on the line as The Usos go up against the team of Shinsuke Nakamura and Rick Boogs.

■ Main event: The return of Steve Austin on the Kevin Owens Show.

We kicked off the night with the SmackDown Tag Team Title match. Boogs was making his debut and he was way too hyped for the match.

GOOSEBUMPS.@ShinsukeN returns to the Grandest Stage of Them All and @rickboogswwe makes his #WrestleMania debut! pic.twitter.com/lWIsR0bwXF

As the match went on, Boogs in an attempt to showcase his strength, tried to fireman’s carry both the Usos and that was just too much for him. Boogs’ right knee gave out and he was taken out of the rest of the match. This was the opening the Usos needed. The numbers game proved to be too much for Shinsuke Nakamura. The Usos hit the Uso Splash but that did not get the job done.

Finally, the Usos followed it with the One-D and that was all she wrote. The Usos retained the SmackDown Titles.

Drew McIntyre had been wanting to get his hands on Happy Corbin ever since WWE Day 1. Ever since Baron Corbin turned into Happy Corbin, he has been undefeated in single’s competition. But that all changed tonight. Drew McIntyre not only defeated Corbin, but Drew also becomes the first ever superstar to kick out after getting hit with the End of Days.

McIntyre got the win after hitting the Claymore. But the Scottish Warrior was not done with that. He took his sword, Angela and in an attempt to threaten Mad Cap Moss, McIntyre sliced the top rope and Mad Cap Moss was terrified to the core.

Rey Mysterio and Dominik Mysterio vs. The Miz and Logan Paul

The Mysterios made their way to the ring wearing outfits representing Mexico and USA.

While Miz and Logan Paul came out representing Pikachu.

.@LoganPaul wearing the most expensive @Pokemon card in the world right now at #WrestleMania! ???????????? pic.twitter.com/ZnCTZD8ln9

Logan Paul put on one outstanding performance. Logan Paul was flying around like a cruiserweight which was much appreciated by the fans and other wrestlers alike. Logan stole the show. I for one must say, he out performed Bad Bunny’s performance last year. Being a true heel, Paul mocked Eddie Guerrero too.

In the end it looked like The Mysterios were going to get the win, after the father son duo hit 2 Frog Splashes on Logan Paul. But The Miz had tagged himself in and he capitalised by hitting the skull crushing finale for the win.

After the match, Miz hit a Skull Crushing Finale on Logan Paul as well. The Miz stole the spotlight away from Logan Paul.

Gable Steveson is at WrestleMania

Stephanie McMahon came out to thank the WWE Universe and then she re-introduced the Olympic Gold Medalist, Gable Steveson. Graves also mentioned that this will not be the last time we see Gable tonight.

Bianca Belair has been dying to get retribution after losing at SummerSlam 2021.This was a grand start, from Becky Lynch’s Marvel Opening, to the Dallas Marching Band playing for Bianca, this match had that big-time feel. Becky Lynch almost repeated SummerSlam, but to her shock, this time around the EST of WWE was prepared.

NOT THIS TIME, BECKY!!!@BiancaBelairWWE was NOT about to let that happen again right away! #WrestleMania #WomensTitle pic.twitter.com/O0c70rvOJa

Both these women put on a stellar performance. After a lot of back and forth action, Bianca Belair finally hit the KOD for the win.

Seth Rollins and the American Nightmare, put on one of the best wrestling matches in a long time! It was an emotional return for Cody Rhodes, making his return after 6 years and for the fans to cheer for him throughout the match was a spectacle! Cody Rhodes paid homage to his father with the classic Dusty Punches and the Bionic Elbow.

Finally after multiple finishers, back and forth, Cody Rhodes hit one last Cross Rhodes to make Rollins’ WrestleMania dream a nightmare.

The WWE Universe have welcomed Cody Rhodes with open arms. Cody also kissed the sacred mat and thanked the fans for the warm welcome.

The Hall of Fame Inductees class of 2022

We got to see all the legends who joined the elite class of superstars in the WWE Hall of Fame. The highlight of the segment was indeed the arrival of the Undertaker. We got one of the loudest pops for the Deadman and truly deserving!

#ThankYouTaker@undertaker returns to #WrestleMania as a WWE Hall of Famer! pic.twitter.com/rztGWfeGKY

This was everything the fans expected it to be. A brutal match. Both superstars gave it their all. Rousey showed Charlotte that she is not a one-trick pony. From the Arm-bar to the Ankle Lock, Rousey locked in several submission moves on Charlotte. The Rowdy One also had an answer to every offence of Charlotte Flair.

But, one thing the Rousey did not expect would happen was the referee getting knocked out. Rousey locked in the arm-bar and the Queen realising the referee was out, she tapped.

Rousey assumed she won the match. She was angry that the referee was knocked out. While Ronda tried to wake the referee, The Queen capitalised and hit theBig Boot on Rousey and got the win.

Kevin Owens is one of the best on the microphone and he proved it here, yet again. As Kevin Owens was talking trash about Texas and Stone Cold Steve Austin, the “Glass Shattered”.

Owens was awfully quiet, Austin gave Owens a handful for everything he had been saying for the past few weeks. Owens then told Austin, that he is actually looking for a fight, and challenged  Austin to a No Holds Barred match.

The Texas Rattle Snake accepted and the match was on.

The match started slow, Kevin Owens was doing all the heavy-lifting, but soon things got a lot more interesting. Kevin Owens got to hit a Stunner on the Texas Rattle Snake himself.

Finally Owens missed a chair shot and hit himself after the chair rebounded on the ropes. Austin hit Owens with a Stunner and that was all she wrote. Austin got the win, then chugged some beers and then it was Stunner number 2 on Owens.

The night came to an end with Austin hitting a 3rd Stunner on Byron Saxton. I think it was just to make Graves happy and at last Austin had a moment with his brother in the middle of the ring.

It was a fantastic show. What was your favourite moment from Night 1 of WrestleMania 38?