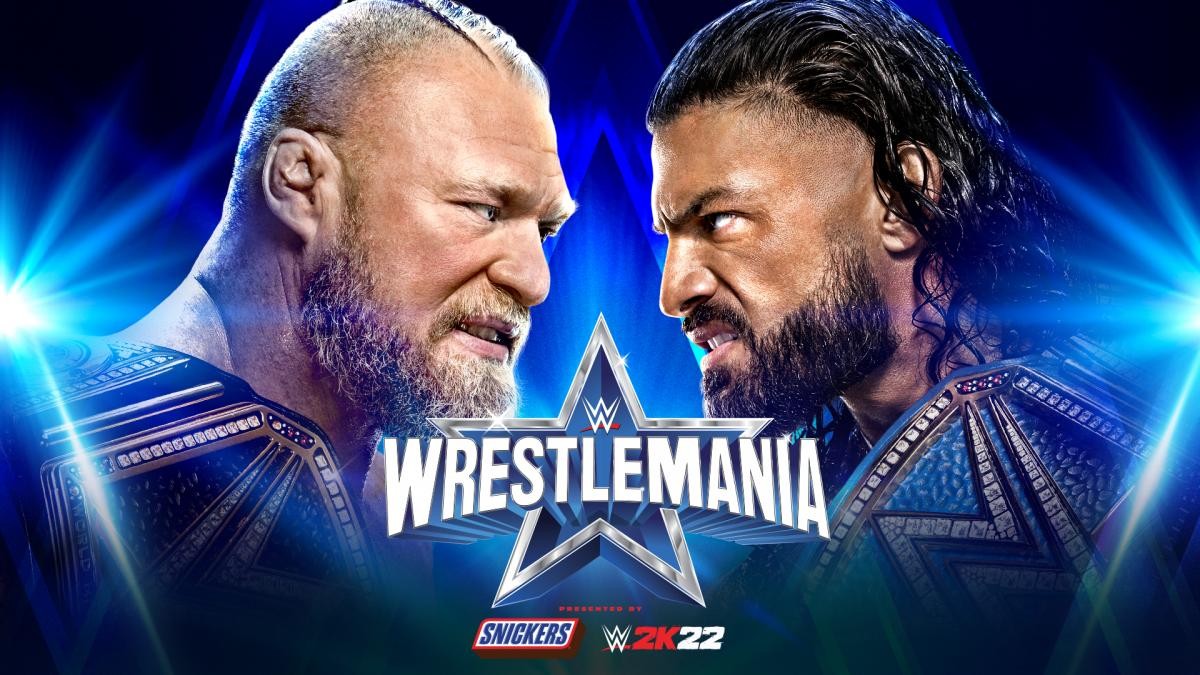 WrestleMania 38 is set to close out the Biggest WrestleMania in WWE History with a bang. Night 1 featured some stellar in-ring performances, grand entrances & some of the best WrestleMania moments in recent memory (click here to know more). Night 2 looks set to continue that momentum and blow it all off with a grudge match 7 years in the making.

Brock Lesnar vs Roman Reigns is the biggest storyline going into WrestleMania 38. The Tribal Chief & The Beast have been on a collision course with each other in an epic rivalry that stretches back to Roman’s first ‘Mania Main Event. They will be looking to determine just who is the Greatest of All Time in WWE.

We have 2 more title matches on the card, as RK-Bro and Queen Zelina & Carmella defend their tag team championships in respective multi-person matches. WWE Hall of Fame member Edge takes on AJ Styles in a legitimate dream match.

Pat McAfee looks forward to fulfilling his boyhood dream against Austin Theory. Sami Zayn finally gets his hands on Johnny Knoxville. And can the All-Mighty Bobby Lashley put down the undefeated giant that is Omos? We find out all that, and more.

The Game has arrived at WrestleMania 38!

Triple H opened up Night 2 with an emotional entrance after retuning to the public eye since his health scare late last year. The Game was greeted by “Thank You Hunter” chants. He thanked the WWE Universe and opened the night with a trademark “Welcome to WrestleMania” chant. He then left his boots in the ring as a sign of his retirement.

We kick off Night 2 with the Tag Team Triple Threat match as RK-Bro defends their titles against The Street Profits & Alpha Academy. Chad Gable shushes his peers as soon as the match begins, to give it a hot start.

All 3 teams went hell for leather as soon as the bell rang, with the action never slowing down. Chad Gable busted out his beautiful moonsault to the outside, but Montez Ford outdid him right before with a crazy, Over The Top Suicide Dive.

The action continues to focus on team-based action as every member of the match starts busting out their signature moves. Riddle hits Dawkins with a Bro To Sleep, before tagging in a red hot Viper for the assist.

RK-Bro retain the Raw Tag Team Championships in what was one of the best opening matches we’ve seen in a long time. After the match, they invited Gable Steveson into the ring to celebrate with them at WrestleMania 38! He joins in by hitting a beautiful Release Belly-To-Belly Suplex on Chad Gable!

The All-Mighty made his shocking return from injury at WrestleMania Raw, where he was revealed as Omos‘ opponent for WrestleMania 38. His entrance at Night 2 of the Most-Stupendous Two-Night WrestleMania of All Time lived up to his moniker.

Bobby Lashley managed to do the impossible and dragged a great match out of the lumbering Omos. The All-Mighty bumped all around the ring for the Giant, even taking a dangerous tumble to the outside.

Bobby Lashley did the impossible and defeated Omos, hitting him with the spear after a suplex that was a WrestleMania moment of its own.

The fact that this is one of the best-built feuds heading into WrestleMania 38 is still insane. But Johnny Knoxville vs Sami Zayn has been peak Sports Entertainment, ever since the Royal Rumble. Tonight, these two blow things off in an Anything Goes Match.

Weighing in at “2 cheeseburgers away from 175” … @realjknoxville is ready for ANYTHING at #WrestleMania! pic.twitter.com/g3wGvejF5X

The bell rings and Sami Zayn immediately Helluva Kicks Johnny’s head off! What follows is a surprisingly hard core Anything Goes Match that sees Johnny Knoxville take more bumps than he gives. Seriously, some of the hits he takes here are nasty. Like this hit to the spine with a crutch. Yikes!

The Jackass Forever cast gets involved and gives Sami the comeuppance he deserves. Brock Lesnar’s favorite person in the world- Wee Man- gives Sami a friggin’ body slam at WrestleMania 38, for Christ’s Sake!

After putting each other through nearly 15 minutes of Sports Entertaining in-ring action, Knoxville picked up the victory after sending Sami through a mouse-trap laden table and then pinning him with the help of a giant mouse trap. This match was far better than we could’ve even imagined, and credit to Johnny for taking all the hits that he did here. WWE really is putting on the best celebrity matches in pro-wrestling today!

Sasha Banks entered WrestleMania 38 driving a Lamborghini. That’s it, that’s the moment. No? You want us to talk about the match? Fine, then.

This match built into something special. WWE made it weird by having only 2 women be the legal members of the match when it started, but that didn’t matter once the action picked up. Queen Zelina hit a beautiful moonsault to the outside, proving why she’s the most underrated member of the roster.

There was a Double Tower of Doom spot, and we’ll run out of space on this article if we keep listing all the big moments from the match. Track it down; it’ll be worth your time. Sasha Banks finally got the Big W at the Grandest Stage, winning the WWE Women’s Tag Team Championship alongside Naomi at Night 2 of WrestleMania 38.

Both competitors enter the ring determined to immortalize their respective legacies. Styles looks like he got hit by his entrance pyro because he’s bleeding before the match even begins. Edge, of course, is channeling his inner Undertaker & Gangrel these days.

It started off with a look at the Rated-R Superstar of old, as Edge cheekily backs away from AJ Styles. They then proceed to exchange holds and counters for the opening section of the match, showing off their veteran instincts. Edge takes control when things spill to the outside, keeping the Phenomenal One chopped down to size. He counters a springboard 450 and assumes control of the match.

Edge dominates a good portion of the match, reminding us why he was the best thing in WWE up until his forced retirement. The story of this fight is a back-and-forth tale between two legends who have helped shape the industry in their own way. Both men break out moves they otherwise wouldn’t. The biggest spot of this match that wasn’t the finish involved AJ delivering a nasty suplex to Edge on the ring apron.

The finish itself was rather intriguing. As AJ was preparing to deliver the Phenomenal Forearm, Damien Priest crashed the party. The former US Champ’s distraction allowed the Rated-R Superstar to pick up his first WrestleMania victory since coming out of retirement. It looks like the rumors are true; Edge is forming his own stable, and Priest is its first member!

This match was an instant classic; period.

This match was disappointing. It didn’t start off that way. The New Day made an emotional entrance, paying tribute to their hospitalized comrade Big E with their ring gear.

The match began as hot as you’d expect a match between these 4 competitors to be. Sheamus delivered a Brogue Kick very early into the contest, which told us that this wasn’t going to be an especially long affair. But nothing could’ve prepared us for what happened next. Xavier Woods- who returned from injury just a few days ago- was in the middle of his Big E tribute set when he was shockingly pinned out of nowhere. The post-match angle saw Butch continue the beatdown to keep the heat on Fight Night.

Butch adding insult to injury at #WrestleMania!@WWESheamus & @RidgeWWE take down The #NewDay on the Grandest Stage of Them All! pic.twitter.com/lWrQOyDiGK

After having their match cut from WrestleMania 38 Night 1, The New Day deserved better than this. And WWE needs to fix this mistake real quick.

VINCE MCMAHON IS HERE! The Chairman of the WWE has arrived at WrestleMania 38!

Mr. McMahon is making his way to the ring for @PatMcAfeeShow vs. @austintheory1 at #WrestleMania! pic.twitter.com/rWvrsDFx61

He takes a sweet WrestleMania selfie with his protégé Austin Theory as well.

Pat McAfee yeets a football into the crowd as he enters the match alongside the Dallas Cowboys Cheerleaders. He comes out of the gate hot, landing strikes and exchanging moves with Theory before hitting a beauty of a hurricurana on the rising star. The AT&T Stadium never once stops chanting for him. Pat doesn’t forget about his full-time job either, peppering Theory with lefts & rights with his broadcasting headset on!

McAfee wows Dallas with a massive superplex off the top rope that makes the AT&T Stadium come unglued.

Pat picks up the victory in what was a surprisingly exceptional match-up, but the night isn’t over for him because…

Yes. This happened. After Pat defeated Austin Theory, Mr. McMahon berated his protégé. As McAfee was celebrating in the ring, he locked eyes with the man he was originally slated to face at WrestleMania 38. And then, in the most bizarre moment in WrestleMania history, Vinnie Mack stepped into the ring for a match! For the first time in 12 years!

Mr. McMahon heeled it up only how he can against McAfee, and “beat” him in a match designed to get Theory over as the rising prospect of WWE. And then, the glass shattered, and “Stone Cold” Steve Austin opened another can of whoop a** on Vince McMahon at the Grandest Stage of Them All! This segment was one of the wildest things we’ve seen on a WrestleMania card in a long, long time; and we mean that in the best way possible.

Explosive. That’s all I can say about this match. Brock Lesnar & Roman Reigns turned up to WrestleMania 38 to put on a show. The biggest show in WWE history. And that’s exactly what they did.

Brock Lesnar was on form, but this was The Tribal Chief’s night. He elevated every Lesnar spot we’ve become familiar with through sheer star power. That barricade spot was probably the best one we’ve seen in a long time.

The Beast took Reigns to Suplex City and acquainted him with all its attractions and coolest spots at least 5 times.

But in the end, we all knew what the finish was going to be. After some top-class acting from the Wise Man Paul Heyman and a career-best performance from Brock, Roman put the exclamation point on his ascent to the top by pinning Lesnar in the middle of the ring, becoming the Undisputed World Champion of WWE.

After a fantastic Night 1, we didn’t think WWE would pull it out of the bag, but they did. The card was good, the matches were great, and the moments created- across this weekend, especially- have been immortalized already. They truly made WrestleMania 38 the Most-Stupendous Two-Night WrestleMania in WWE History.

3 Reasons Why Bianca Belair Is a Bigger Star Than Ronda Rousey, Charlotte Flair, and Becky Lynch