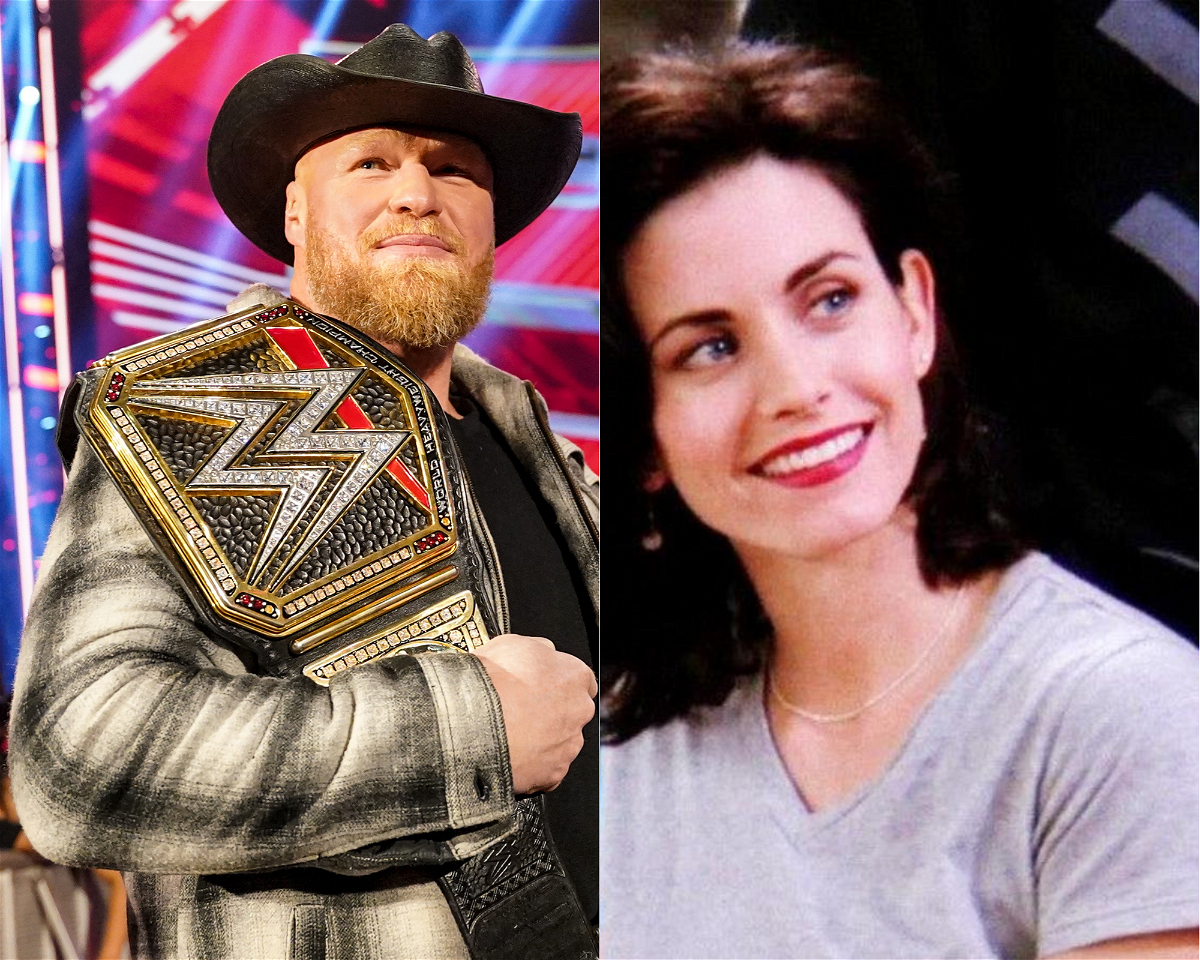 Brock Lesnar is many things. He’s a multi-time World Champion in Sports Entertainment across multiple promotions. He’s one of the biggest draws in UFC history. He’s a moose hunter by his own admission; and it looks like The Beast Incarnate might just be a huge fan of Courtney Cox!

For a very long time, we knew next to nothing about the Man Behind The Beast. Brock Lesnar is a very private person. He even told “Stone Cold” Steve Austin that he simply “doesn’t like people” in what was a rare interview; at the time, anyway.

Ever since returning to the WWE in 2021 though, it’s been a whole other story. The Beast took a well-deserved hiatus, recharged his batteries on his farm in Saskatchewan, Canada and came back in the best shape of his career; which really is saying something. It drove Pat McAfee crazy on commentary, so there’s that as well. Cowboy Brock is the gift that keeps on giving; both in terms of entertainment, and for the first time, his life outside the ring.

Brock Lesnar has been opening up more in interviews recently

It’s kinda odd seeing The Beast without his Advocate. But to be fair to Brock, he can more than hold himself on the stick. People seem to forget; Brock Lesnar is one of the best entertainers in the world. His skits with Kurt Angle are the stuff of legend.

He’s been proving his worth as a solo act in his recent run with more gusto than we’ve ever seen from him. He’s also been doing a lot more interviews, having a stellar 50-minute conversation with Pat McAfee just last month. And now, he’s followed that up by revealing just what he does in his free time to Michael Kay.

Brock Lesnar reveals what he does with his free time

Brock Lesnar recently stopped by The Michael Kay Show and opened up about a lot of things. He revealed his daily diet, his personal thoughts on the infamous Shooting Star Press Botch from WrestleMania 19, and what he does with his free time. Turns out, he’s not exactly a binge-watcher like us.

Brock Lesnar doesn’t exactly watch TV. He barely watches the UFC or WWE programming, for that matter. But that doesn’t mean he’s completely sworn off entertainment. He admitted that he likes watching sitcoms like Seinfeld and F.R.I.E.N.D.S when he’s in the mood for some TV.

He even said that Monica is his favorite character; though he didn’t exactly recall her name, in true Brock Lesnar fashion. It’s tidbits like this that makes The Beast so much more human- and by extension cooler- in the fans’ eyes. We can’t wait to see how the Main Event of Night 2 of WrestleMania 38 plays out. You can catch our theories on the result of Brock Lesnar vs Roman Reigns, here.