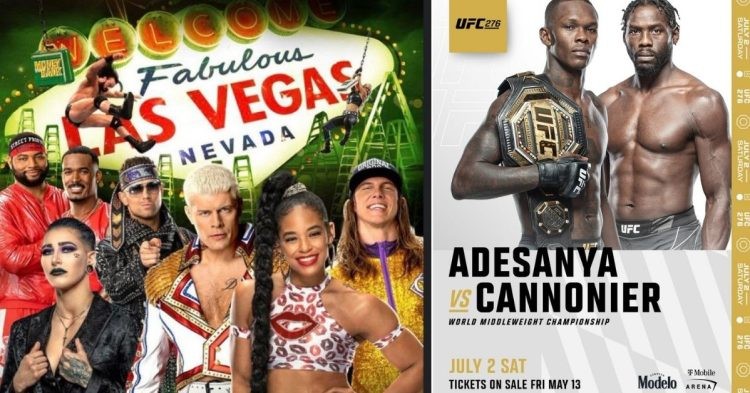 WWE and UFC will go neck and neck as the Money in the Bank premium live event will be pitted against the UFC 276 pay-per-view in July. Both shows will be taking place at Las Vegas, Nevada. Money in The Bank was originally set to take place in the Allegiant Stadium. But it has now been shifted to the MGM Grand Garden Arena.

WWE sent out the following email to fans that Money in the Bank will now take place at the MGM Grand Garden Arena pic.twitter.com/HC2h4nhpqe

UFC will have its International Fight Week from 27th June to 3rd July. As for WWE, Money in the Bank will be taking place on 2nd July. The reason for shifting the show’s venue hasn’t been specified by WWE.

Both events, UFC 276 and Money in the Bank, will take place in the same city. UFC, on the other hand, will be having its pay-per-view at the T-Mobile Arena on Sunday, 3rd July. Current UFC Middleweight Champion Israel Adesanya will face Jared Cannonier in the main event of the show. WWE initially announced that Allegiant Stadium would host MITB, but it was later shifted to a smaller arena.

The Allegiant Stadium was the host of SummerSlam in August 2021. WWE’s move from the stadium to the MGM Grand Garden Arena was announced through an e-mail that was sent out to the fans who purchased tickets for the show.

How will the competition with UFC impact WWE?

WWE and UFC have rarely seen their shows go head-to-head. And whenever it has happened, Vince McMahon has been on the losing side of the competition. And now, the venue change has been speculated as to the consequence of WWE not being able to sell tickets. Las Vegas may not be the best place for such a big wrestling show.

Money in the Bank is seemingly not being able to hold the same ticket-drawing appeal as the other major live events. AEW CEO Tony Khan shared a post on Twitter talking about the fact that he told UFC President Dana White that WWE moved the MITB venue. He took a jab at WWE for pitting their show against UFC.

Genius move trying to take on Dana and the UFC in Vegas during International Fight Week.

WWE has also removed some key names from MITB, and most of the original plans have been omitted. Roman Reigns, Brock Lesnar, Ronda Rousey, Sasha Banks and Charlotte Flair are few superstars who will be absent from the show.

Vince McMahon is trying to push Money in the Bank as one of the top five featured WWE live events along with Royal Rumble, WrestleMania, SummerSlam and Survivor Series. We’ll have to wait and see how WWE fares against UFC this time.