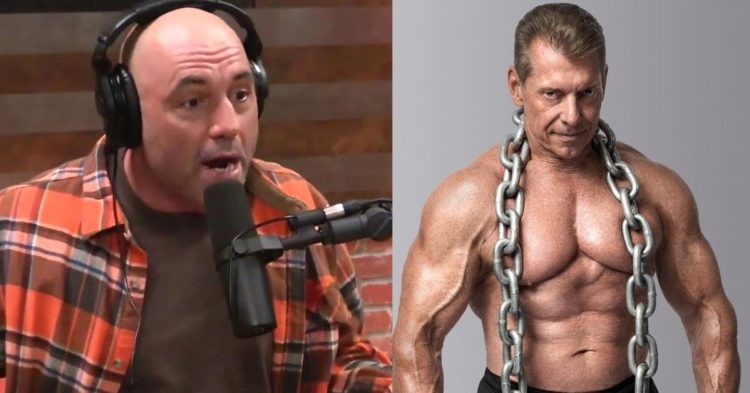 Joe Rogan, the UFC commentator and host of his own podcast ‘The Joe Rogan Experience,’ covers Former WWE Chairman Vince McMahon’s shady money dealings and affairs with multiple women in the company.

Joe sits with his friends and informs them that Vince McMahon got kicked out because he was busted with a “bunch of floozies”. “He paid a bunch of ladies with company cash,” Rogan says.

The guest made fun of it, stating, “Who knew WWE money was wasted in such a way?” Joe explained why Vince may have done so. Joe says, “If you look like that and you are 70 years old and you are the head of the WWE, you are slinging di*ks”. He then sarcastically adds that if Vince hadn’t done what he did with all the money, “he would have been more disappointed.”

They then discuss how, at the age of 77, Vince is still jacked. “Bro, he looks f***ing great for 77,” Joe added. Even at his age, Vince is known for his incredible physique. He has been a fitness freak his entire life, devoting his time to working out with ‘chains’ around his neck.

McMahon appeared at WrestleMania 38 last year, which surprised fans because he wasn’t announced for a match. Even Joe Rogan was taken aback by McMahon’s appearance.

Vince McMahon’s final match was at WrestleMania 38, where he defeated Pat McAfee with help from Austin Theory. Following that, Steve Austin rocked him with a stunner, which made for a pretty entertaining match for the packed crowd.

Joe Rogan discussed Vince McMahon competing at WrestleMania 38 despite his age on his podcast, the Joe Rogan Experience. Rogan expressed his praise for McMahon’s physique.  Rogan said, “Bro, he looks f***ing great for 77.” (At) 77, you’re supposed to be a dead man, you’re not supposed to be pro-wrestling. Yeah. Bro, he’s older than my mom.”

Vince McMahon is a fitness enthusiast. Several past and present athletes have stated that Vince spends nearly all of his personal time in the gym. At an age when most men retire and enjoy the results of their work, WWE head honcho Vince McMahon is still as dedicated to his body as he is to the business.

Now that Vince has returned to WWE, fans and talent alike are concerned about the company’s future. Following Stephanie McMahon’s resignation, rumors of WWE being sold to Saudi Arabia surfaced. While nothing has been confirmed, rumors imply that Vince is returning solely to sell the WWE.