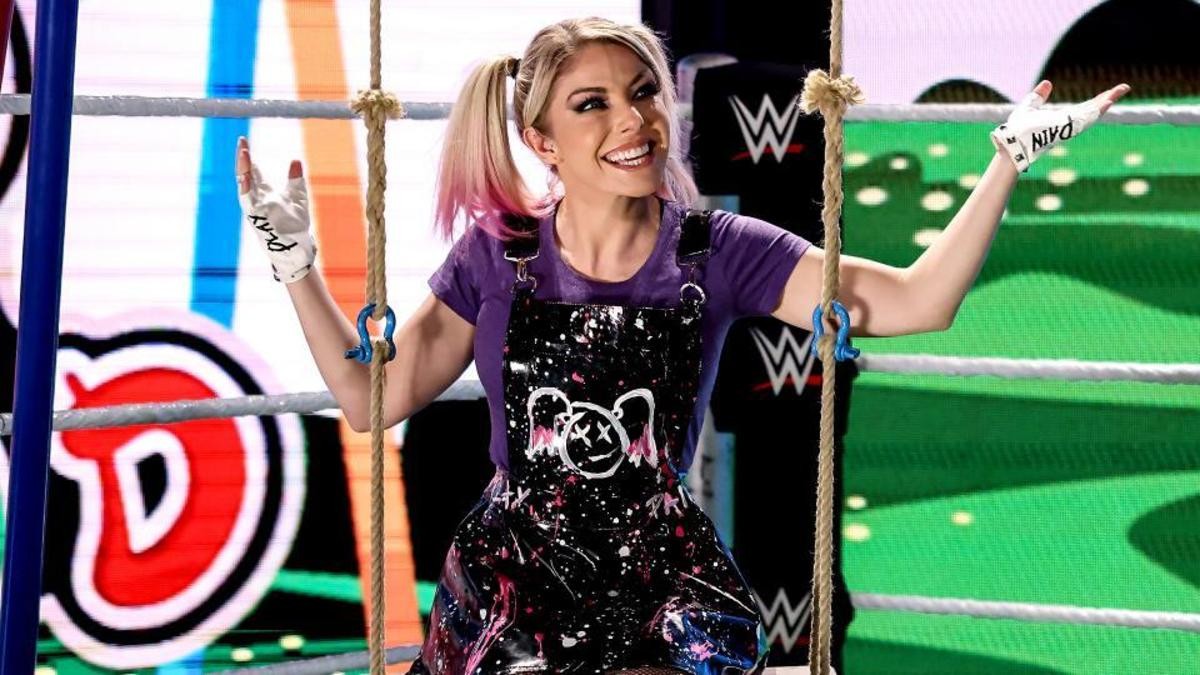 Alexa Bliss made a return to in-ring action at the Elimination Chamber Premium Live Event. The Goddess competed in the Women’s Elimination Chamber match to earn the right to challenge for the Raw Women’s Championship at WrestleMania. Despite it being a losing effort, Bliss showed the WWE Universe why she is called the ‘Goddess‘. Even after a dominating performance at the Chamber, she was not featured on last night’s Raw. Does WWE creative have nothing for the Goddess? Well, if that’s the case WWE, please allow me to write some storylines for the Goddess’ future.

A superstar who has been striving hard to reach the top is Liv Morgan. Her dream to headline WrestleMania 38 was ruined thanks to the Evil Goddess. Bliss was the one to eliminate Morgan at the Elimination Chamber. In the upcoming weeks, Liv Morgan will show up on Raw and call out the Evil Goddess. This will eventually lead to a match at WrestleMania. Yet again, Liv Morgan will lose at the Grandest Stage of them All.

According to WWE, one of the main reasons for Bliss to take some time off wrestling is to stabilize her mind. The Goddess went to therapy for this purpose alone. Before Bliss’ fiendish transformation, she was teaming with Nikki Cross. The two had built a good friendship and had great chemistry as a team. Currently, Nikki Cross has transformed into Nikki A.S.H and is feuding with Rhea Ripley. Nikki has been constantly losing to Ripley and she is in dire need of some help. The perfect help would be Alexa Bliss. Since the Goddess has seemingly been cured, she could renew her friendship with Nikki. The two can team up yet again, defeat Ripley and move back into the tag team titles picture. Bliss and A.S.H would be the right people to make the Women’s tag team titles relevant again.

The other option involving Bliss and A.S.H is obviously the two feuding with each other. In another match between Rhea Ripley and Nikki A.S.H, finally, A.S.H will be on the verge of victory, but at the last minute, the lights go out and when they are back, Bliss is in the ring. The Evil Goddess begins to beat the living hell out of her former friend Nikki A.S.H. At WrestleMania, The Goddess will take on the ‘Almost A Super Hero‘ in a one-on-one match. Alexa will win the match and at the end of the match, Bliss rips off Nikki’s mask as she leaves the ring.

The next night on Raw the two make amends. Bliss says that Nikki does not need to be a superhero as she already is. The two become friends again. Team ‘Bliss-Cross Apple Sauce‘ will eventually move up the ladder to win the WWE Tag Team Titles.

Back in the hunt for the Raw Women’s Title

Alexa Bliss is a 3-time Raw Women’s Champion. Before she went away, she faced Charlotte Flair for the Raw Women’s Title. Not only that, but the Goddess also was the last to get eliminated in the No.1 contender’s Chamber match. The winner of the match, Bianca Belair will be facing Becky Lynch at WrestleMania 38. Bianca is most likely going to be the one to finally dethrone Big Time Becks. Bliss can be the first one to challenge Bianca for the title. Bianca and Bliss had a good showdown in the little time they got at the Chamber. So, I can only imagine how awesome a one-on-one match between them will be.

As we all know, WrestleMania season is the time when superstars switch brands teasing the annual WWE Draft. As mentioned earlier, the last single’s match for Alexa was against Charlotte Flair. Flair is set to face Ronda Rousey for the SmackDown Women’s title. To get her revenge, the Evil Goddess may interfere with the title match and cost Charlotte Flair her title. From there on we could see Bliss and Charlotte fight each other in the following Premium Live Events. Of course, the Queen would get a rematch against Ronda Rousey, Bliss will cost Charlotte yet again. A furious Charlotte can challenge Bliss to a No Holds Barred match.

These are 5 ways that WWE can build the storylines for Little Miss Bliss. You are most Welcome WWE.

What are your thought on these pitches? Let us know in the comments.