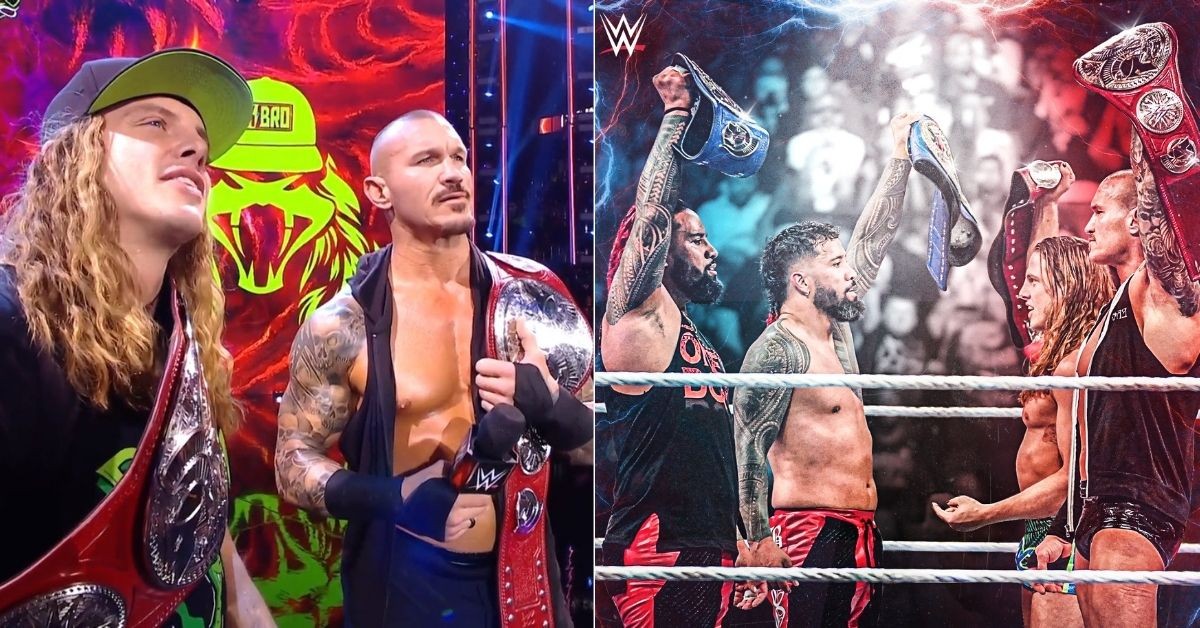 The recent episode of SmackDown saw the Usos defeating RK-Bro to become the Undisputed WWE Tag Team Champions. The Bloodline now reigns supreme in WWE with six championships under its belt. However, here are a few reasons fan-favorite RK-Bro should have won the titles instead.

5. RK-Bro is the hottest tag team in WWE

The unlikely team-up of Riddle and Randy Orton has become one of the most loved tag teams of all time. They are one of the top babyfaces in the company and have been constantly involved in the main-event scene.

.@SuperKingofBros has learned SO MUCH from @RandyOrton over the last year 👀 pic.twitter.com/uuSNJHog6l

Winning both the titles would have propelled them to another level, and fans could have seen a lot more interesting championship matches with the up-and-coming tag teams in the main roster and NXT 2.0.

4. An interesting conclusion to a long-time storyline between Riddle and Randy Orton

RK-Bro is one of the best babyface tag teams today. Both Riddle and Orton have garnered a lot of love from the WWE Universe. WWE could have opted to go for a feud between the tag partners in the future should they have won the title unification match. Their journey from an unlikely team to fierce opponents could make for a great rivalry.

Adding the championship could give more weight and legitimacy to the reason behind the conflict between Riddle and Orton. Fans will be fully invested in it with a proper storyline. It could have proved to be a vital part of pushing the Original Bro up the card as a singles competitor.

3. Another accolade for Randy Orton

Randy Orton is a 20-year WWE veteran who set a new record recently. He created the record for most pay-per-view matches by any WWE superstar as RK-Bro defeated the Usos at Survivor Series 2021.

🐍 Survivor Series saw Randy Orton set the record for most pay-per-view matches by any WWE Superstar and what better way to celebrate but with an 𝑹-𝑲-𝑶 𝒐𝒖𝒕𝒕𝒂 𝒏𝒐𝒘𝒉𝒆𝒓𝒆!?

Watch the full PPV on Catch Up 📺 pic.twitter.com/1ZXKPpQPEd

Should RK-Bro have won, Orton would have had another record under his belt. He is already a 1-time Undisputed WWE World Heavyweight Champion. If RK-Bro had won the title unification match, Orton would have been the first superstar to become the undisputed singles and tag team champions.

2. A new direction for the Bloodline

The Bloodline has cemented itself as the most dominant faction in WWE after acquiring both brand’s tag team championships and the Universal and WWE World Heavyweight Championships. While the formation of the Bloodline was interesting, it has started to grow stale.

If the Usos had lost the titles, WWE could have had the opportunity to take a creative direction for the Bloodline. It could have led to an implosion for the faction. We’ll have to wait and see how WWE follows up to win the Usos’ win.

The promo and in-ring chemistry of RK-Bro are undeniably great. They have been one of the most entertaining aspects of the WWE product since capturing the RAW Tag Team Championships at SummerSlam 2021.

Their journey to becoming a well-oiled team has put them over among fans. The WWE Universe would have been more invested in RK-Bro if they became the undisputed tag team champions.

What are your thoughts on RK-Bro losing the tag title match? Drop your comments below.