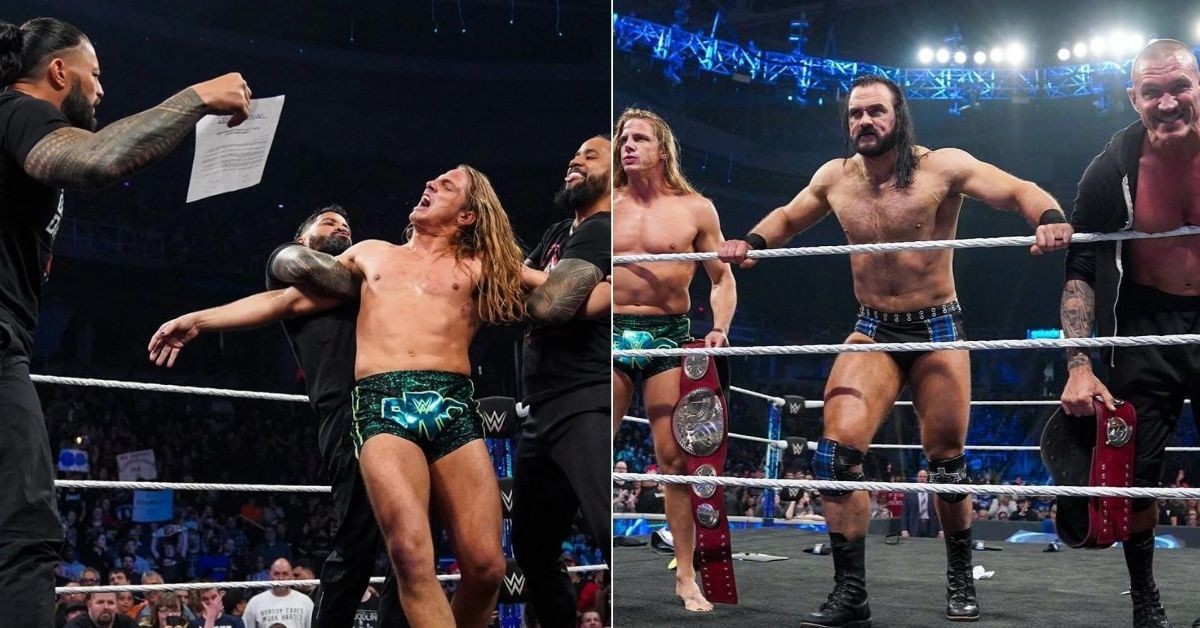 In the latest episode of Friday Night SmackDown, the WWE Tag Team Title Unification match was scrapped from the cards. WWE has confirmed that The Bloodline will face RK-Bro and Drew McIntyre in a 6-man Tag Team match at WrestleMania Backlash. None of the Tag Team titles will be on the line.

SmackDown held a contract signing segment between The Usos and RK-Bro for their tag team title unification match. As the Usos attacked Randy Orton and Riddle, Roman Reigns music hit as he came out and entered the ring.

He attacked Riddle after ripping the contract apart. Drew McIntyre came to the RK-Bro’s aid, which teased a feud between McIntyre and Reigns. Let us look at a few possible reasons for WWE’s decision to cancel the second title unification match of the year.

1. WWE is concerned about ratings

The Undisputed WWE Universal Champion has been absent from SmackDown after appearing in the post-WrestleMania edition of the show. It resulted in a massive rating decline on Friday nights.

A match involving Roman Reigns could help solve the problem. The Tribal Chief seemed injured after his match against Brock Lesnar at WrestleMania 38. A tag team match might help Reigns avoid too many bumps.

2. Roman Reigns to begin a feud with Drew McIntyre

The Tribal Chief has defeated most of the notable names on the roster. The cancellation of the title unification match may also be the reason to promote this feud. McIntyre is fresh over his victory over Happy Corbin at WrestleMania 38. This could mark the beginning of the biggest feud in WWE this year.

WWE has already unified two of their top singles titles at WrestleMania this year. They may not be ready to unify the tag titles yet. The brand split is still active, and WWE has shown no signs of wanting to end it.

Many superstars have been called up to the main roster from NXT. WWE has also formed new stables, such as Judgement Day. A Title Unification match may not be the best course of action for WWE at the moment. New tag teams could benefit from championship programming.

Both tag team titles have the words Raw & Smackdown in them, making them brand exclusive. The color of the championship belts also caters to their exclusive brands.

The WWE World Heavyweight and Universal Championships do not cater to any specific brand. But in the case of the tag team titles, a unification match will only create a brand conflict.

5. RK-Bro is too hot to breakup

Randy Orton and Riddle are on a roll as the RAW Tag Team Champions, RK-Br0. Monday Night RAW has been great lately, and RK-Bro is one of the reasons why.

They are one of the most over-acts in WWE at the moment. Randy Orton admitted to having a time of his life in his current WWE run. A Title Unification Match could only result in RK-Bro breaking up. It may not be the right time for WWE to break up their best babyface tag team yet.

The feud between Roman Reigns and Drew McIntyre was a long-awaited one. But, it would be interesting to see how the tag team division proceeds after the cancellation of the Title Unification Match. Share your thoughts in the comments below.