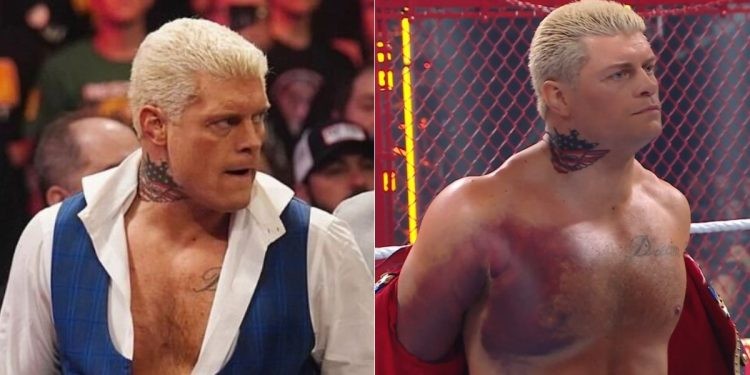 “For the love of the game.” – @CodyRhodes #HIAC pic.twitter.com/3bHlLl5UB9

The American Nightmare could be out for more than six months to nurse his injury. Rhodes’ courageous performance at the Hell in a Cell premium live event saw WWE’s viewership for RAW increase. Let us look at why WWE could lose TV ratings in the absence of Cody Rhodes.

5. WWE was pushing Cody Rhodes as the top babyface of RAW

Cody Rhodes has been the main feature on RAW since returning to WWE after six years of absence. WWE had run several adverts presenting as the face of the red brand. These plans will now have to take a backseat due to his injury.

The advertisement on NBC for WWE. pic.twitter.com/lm6TJaNKRi

Rhodes’ absence has now made WWE desperate for a new top babyface on RAW. He will reportedly be out of action for six months. WWE had big plans with The American Nightmare, but it will have to wait for now.

Rhodes had teased a return at the Money in the Bank premium live event in his promo on the recent episode of RAW. But it is unlikely that he might do so.

4. Lack of exciting feuds and matches

Cody Rhodes’ three matches with Seth Rollins proved how good of a storyteller he is in the ring. His comeback to WWE Created so much excitement among the fans who fantasized about all the possible dream matches. Cody’s ability to engage the audience is second to none.

Most of the ongoing rivalries on RAW and SmackDown haven’t had as much impact as Rhodes has had. It could another reason why WWE should be worried. The American Nightmare taking on other big names such as Kevin Owens, Riddle, and more could have made for some great TV ratings and viewership.

Recently, WWE released a lot of talents from the roster. The reason was cited as budget cuts, but there were some big names as well. With the absence of Cody Rhodes and Roman Reigns, WWE is suffering from a lack of roster depth. WWE has been using a few superstars from both brands on both shows, including Riddle, The Usos, and Shinsuke Nakamura.

The Undisputed WWE Universal Champion Roman Reigns signed a new contract with WWE, which allows him to work lesser shows than before, just like Brock Lesnar. Several big names such as Charlotte Flair, Brock Lesnar, Bayley, and Randy Orton have been snubbed from upcoming premium live events.

WWE even shifted the venue for Money in The Bank from the big Allegiant Stadium to a smaller MGM Grand Garden Arena due to a lack of ticket sales.

There is little to no doubt that Cody Rhodes has been one of the most crowd-engaging superstar in the current WWE roster. Only a few have been able to achieve what Rhodes have in a short period of time. Although, Riddle and Randy have been getting big crowd reactions, WWE still lack crowd pullers.

WWE have recently added a few superstars to the main roster, namely Gunther and Butch. But they are yet to gain a substantial grip on the main roster. It is also argued that there are many superstars who are not ready for primetime television.

Even though Cody Rhodes teased a return at Money in the Bank, it is unlikely that he’ll return anytime soon. It is believed that Cody Rhodes may take up to six months to make a full recovery. This rules out the possibility of a Rhodes vs. Reigns match this year.

After another win over @WWERollins, @CodyRhodes is ready to move forward and chase his championship dream. #WMBacklash pic.twitter.com/sKu8DmBjC3

Cody explained that the sole aim of his WWE return was to win the biggest prize in WWE, which has alluded his family till now. The match between Roman Reigns and Cody Rhodes could have so many layers, with both superstars hailing from wrestling families. Unfortunately, fans will have to wait until the American Nightmare makes a full recovery.