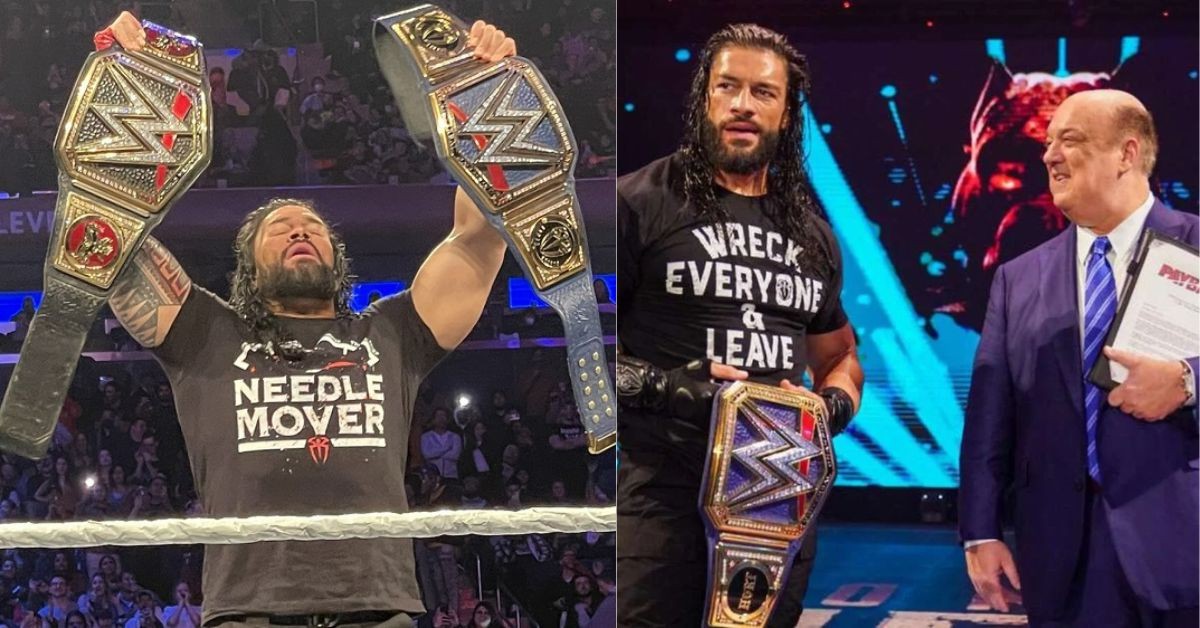 WWE has confirmed that Roman Reigns will team up with his cousins, The Usos, to take on Drew McIntyre and RK-Bro in a 6-Man Tag Team match at WrestleMania Backlash. As reported earlier, the Tag Team Title unification match was scrapped, and none of the tag titles or singles titles will be on the line at the upcoming premium live event.

WWE has not revealed any plans for Roman Reigns’ Title Unification Match since his win over Brock Lesnar at WrestleMania. Let us take a look at a few reasons why.

5. WWE is trying to avoid Roman Reigns from having repetitive matches

Roman Reigns has wrestled most of the top-tier superstars many times in his 10 years with WWE. Reigns is in the best run of his career. WWE doesn’t want Reigns to lose his value since he’s the supposed face of the company.

4. WWE is trying to renew the Roman Reigns and Brock Lesnar rivalry

Brock Lesnar hasn’t appeared on WWE programming since his loss to Roman Reigns at WrestleMania 38. Reports have claimed that the Beast Incarnate will soon be back to feud with the Tribal Chief.

Wrestling Observer’s Dave Meltzer believes that Reigns lacks credible contenders for his unified championships. It can drive WWE to call back Lesnar for a renewed rivalry. WWE won’t mind pulling this trigger due to the star power of both superstars.

3. WWE is planning a big money match for future

Roman Reigns has been the top star of the company for a while now. WWE realized his star power when FOX demanded that he stays on SmackDown. Wrestling Legend Dutch Mantell, believes that WWE is planning a big match for the Tribal Chief in the future.

With the lack of babyfaces, apart from Drew McIntyre and Cody Rhodes, it is believed that WWE would want Reigns to fight Randy Orton following the SmackDown Contract signing segment. Mantell also mentioned that the promotion is saving the match for later.

2. WWE is waiting for SummerSlam

Another reason for the delay in Roman Reigns’ Championship Unification Match could be WWE’s decision to wait for SummerSlam. It is one of the big four shows of the year. Many superstars and legends have participated in big matches and made their returns during SummerSlam, such as John Cena in 2021.

SummerSlam is approaching soon and fans could hope to see Roman Reigns find his next big rival for a Title Unification Match.

1. WWE have plans for a Cody Rhodes and Roman Reigns feud

The most discussed topic in wrestling is concerned with Cody Rhodes being the one to defeat Roman Reigns to claim the Undisputed Universal Championship. But, Rhodes has been presented as the face of Monday nights in a recent advert aired by NBC. It begs to question, when will Cody Rhodes face Roman Reigns?

The American Nightmare will have a rematch against Seth Rollins at WrestleMania Backlash. It could be a while before Rhodes could engage in the title scene with the biggest star in the company. Rhodes himself revealed, in a promo segment on RAW, that his main reason for coming back to the WWE was to capture the top prize in the company. WWE could push him forward for a feud with the Tribal Chief should Rhodes defeat Rollins in their WrestleMania rematch. Share your thoughts on Roman Reigns in the comments below.

5 Shocking Results That Can Take Place at WrestleMania Backlash