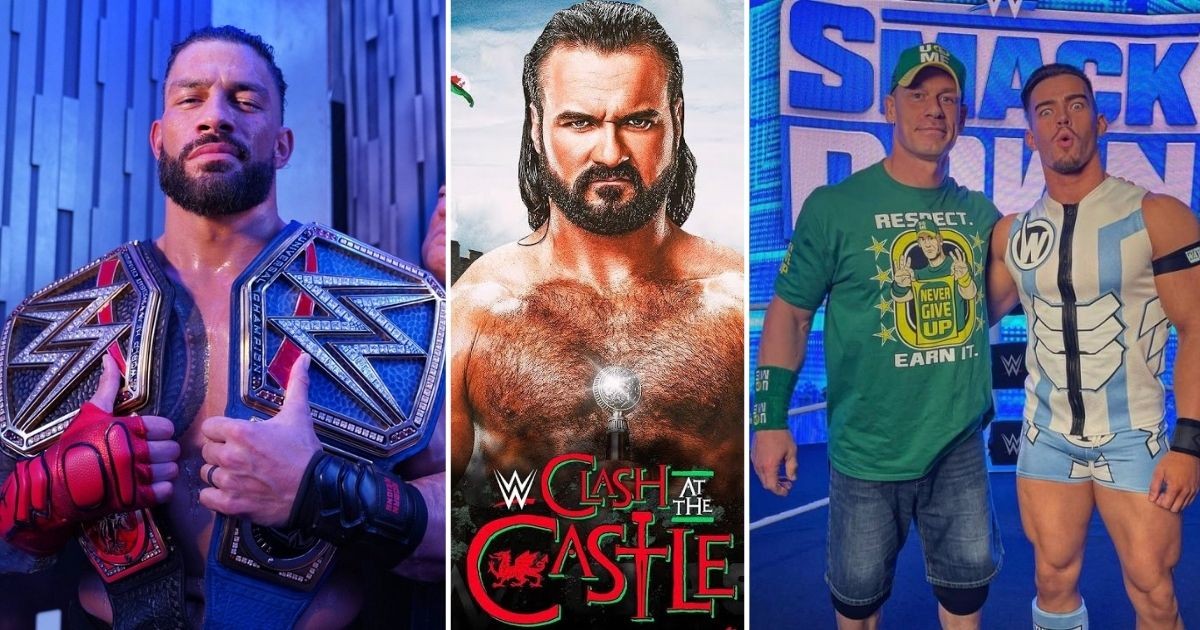 WWE Clash at The Castle

WWE will be holding its first pay-per-view in the UK in 30 years. The show will take place in Cardiff. There are many superstars on the roster who hail from the United Kingdom in the current WWE roster. Here is a list of a few fantasy matches for WWE Clash at the Castle.

BREAKING: WWE Clash at the Castle takes place LIVE from @principalitysta in Cardiff, Wales, on Saturday, Sept. 3, and tickets will be available Friday, May 20! #WWECastle @visitwales

5. Ricochet vs Mustafa Ali for the Intercontinental Championship

Ricochet has proved himself to be a capable Intercontinental Champion in the past couple of months. His high-flying skills are second to none. The UK fans would love the idea of him clashing with another aerial expert, Mustafa Ali. Ali recently made his return to RAW after WWE declined his request for release.

Ali is a former Cruiserweight Champion and an impressive in-ring performer. Ricochet and Ali can steal the show should they go all out during their match.

4. Theory vs John Cena for the United States Championship

Theory posted a Tweet where he claimed to be a better champion than John Cena. McMahon even considers Theory to be a ‘John Cena-caliber’ superstar. It could make for an interesting match if they competed against each other, with the added element of Mr. McMahon on Theory’s corner.

3. Gunther vs. Roman Reigns for the Undisputed WWE Universal Championship

Gunther has made a great impression on the WWE Universe after he debuted on Smackdown last month. He is one of Europe’s best wrestlers and started his WWE journey with NXT UK. It would make sense for WWE to put him in a championship match with the Tribal Chief to push him to the next level.

Gunther is a star for the future, and WWE may look to establish his position on the roster with a match with the Undisputed WWE Universal Champion Roman Reigns at WWE Live UK.

Drew McIntyre is one of the biggest superstars in WWE. The Scottish Warrior has redeemed himself after failing to impress the WWE Universe in his initial run with the company.

Drew McIntyre has been wanting to fight Tyson Fury ever since Fury’s appearance on WWE TV back in 2020.

Unlike you Tyson, I don’t duck a challenge. I’m a fighting Champion. Before I get to you I have some very personal business to handle on #WWERAW

Boxing Legend Tyson Fury has expressed his wish to fight in WWE. He also called out former WWE Champion Drew McIntyre due to the latter’s inflammatory comments about the Gypsy King.

1. Bianca Belair vs. Charlotte Flair for the RAW and SmackDown Women’s Championship

The RAW Women’s Champion Bianca Belair has become one of the most popular female draws in WWE. A match between her and Charlotte Flair for both women’s titles will be treat for the UK fans at Clash at the Castle. Both superstars are at the top of the game and would make a great babyface vs. heel match for the audience.

WWE will be featuring its European superstars at the event. It will be interesting to see what WWE offers to the UK crowd. What are your thoughts on the show? Drop your comments below.