How Will Vince McMahon vs Pat McAfee Go Down at WrestleMania 38? 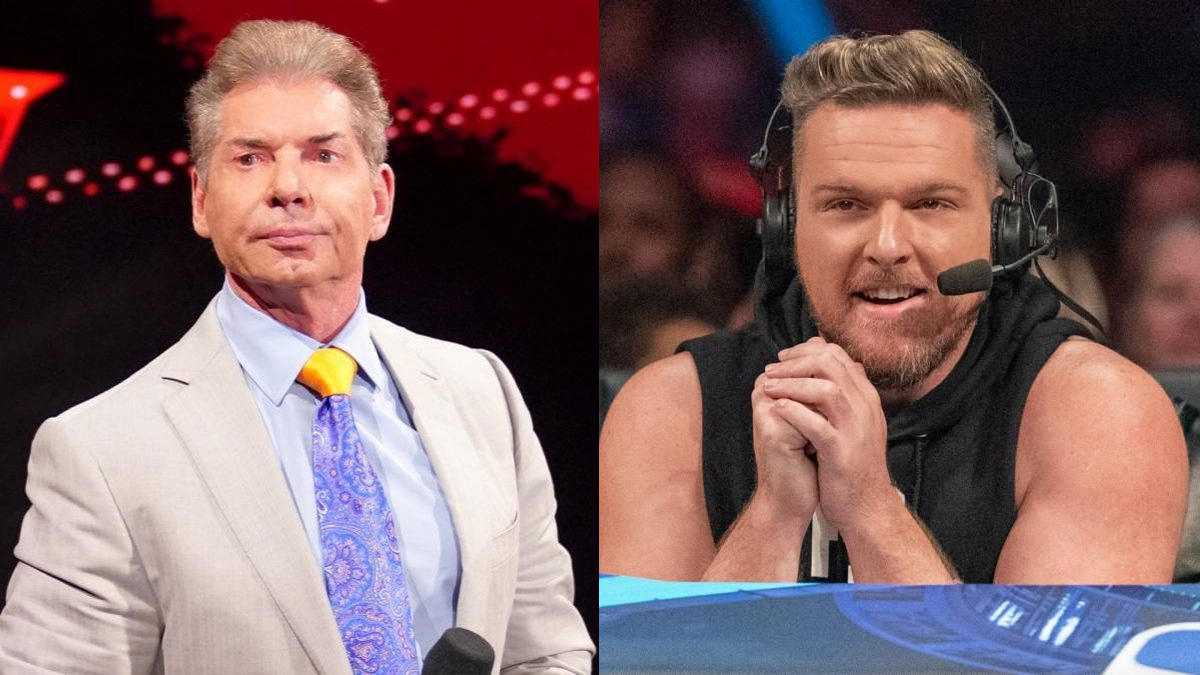 This week, Vince McMahon is scheduled to be the special guest at the Pat Mcafee Show. Since then, the rumour mill was buzzing again. Pat Mcafee was in the spotlight. Brad Shepard reported that there are talks about Pat Mcafee having a match at WrestleMania 38. Not only that, but Dave Meltzer has also reported that Pat’s opponent could most likely be Vince McMahon. Pat Mcafee also sent out a tweet teasing this news.

You all seem to know A LOT more abaht what I’m up to than me..

I’m excited to see what happens at this point as well.. WrestleMania chatter is WILD right now.

If you think imma be a part of something that isn’t a BANGER… you’re AHT of your damn mind pic.twitter.com/G4LqqzvKAH

How could this come about?

If indeed the rumours are true, then the seeds must be planted at the Pat Mcafee show that is taking place this Thursday. The fans love Pat and thus it makes perfect sense for him to work as the Babyface, heading into WrestleMania. Pat is someone who always speaks his mind. He might say something during the show that pisses off Vince. Maybe something like, “When will you hang up the boots and let your son-in-law take over?” An enraged Vince is very upset and talks trash to Pat and then leaves.

In the following couple of weeks, the Chairman of the board makes Pat’s time on SmackDown a living hell. With only 6 days left before WrestleMania 38, Vince is in the middle of the ring on Raw, boasting about how great he is and that no ‘pathetic commentator‘ can sell him short. He asks the WWE Universe to thank him for everything he has done. Just at that time, Pat runs in from the crowd. Just as he is about to attack the boss, Austin Theory runs in from nowhere to save McMahon. Theory and McMahon head backstage.

While the two are at the entrance ramp, Mcafee gets a microphone and issues a challenge, “Let’s settle this, this Saturday at WrestleMania 38.” Austin Theory accepts. Macafee laughs and says, “What happened old man? Do you want someone little kid to fight your battles?” Vince grabs a microphone and replies, “No you son of a bitch, I will fight you“. That was the end of the segment.

On the final SmackDown, Vince demands a contract signing and at the start of the show, he teases a big surprise. We get down to business at the final few minutes left on the show. It is time for the contract signing. Pat signs it first. Just before Vince signs it, he picks up the microphone and says, “You are a fool, you blindly signed. This is no ordinary 1-on-1 match. It will be a tag-team match. Not only that it will be a ‘Falls Count Anywhere’ match. I will team up with my young prospect, the future of this company, Austin Theory. By the way, if anyone back there teams up with this idiot, then you will be fired!”

Mcafee is shocked, he is upset, you can see that in his face. Vince and Austin are laughing at Pat. Slowly Pat’s expression changes. The frown slowly turns into a smile. “You are so predictable. I knew you would do something like this. So, I got myself a backup.” Vince does not believe Pat. He acts like Mcafee’s just bluffing. Mcafee speaks to the crowd, “If you want to see Vince McMahon get his ass beat, then GIVE ME A HELL YEAH!” The crowd go berserk. Vince still does not believe Pat but then the ‘Glass Shatter‘. Vince is beyond shocked, a loud pop from the fans, Stone Cold Steve Austin walks out. He enters the ring, Theory and Vince leave the ring. Stone Cold signs the contract and it is made official! Pat Mcafee and Stone Cold Steve Austin take on Austin Theory and Vince McMahon.

It is time for WrestleMania 38

WrestleMania 38 kicks off with the tag team match. Stone Cold attacks Vince, Pat Mcafee and Austin Theory fight each other for the majority of the match. The Texas RattleSnake hits a Stunner on Vince at the top of the entrance ramp. Stone Cold is also tired and so passes out. Meanwhile, Pat and Theory have a good back and forth in the ring. Pat looks to get the win with a Punt kick, but theory counters and hits his ATL slam for the win. Vince McMahon and Austin Theory win the match. This win gets Theory a championship opportunity at WrestleMania Backlash.

This is how I wish the Vince McMahon return takes place. Neither Pat Mcafee nor Stone Cold Steve Austin needs the win. With Austin Theory getting a win at the grandest stage, especially against a WWE Hall of Famer in the name of Stone Cold, will only elevate his career further.

What do you think about this storyline? Let us know in the comments section below.