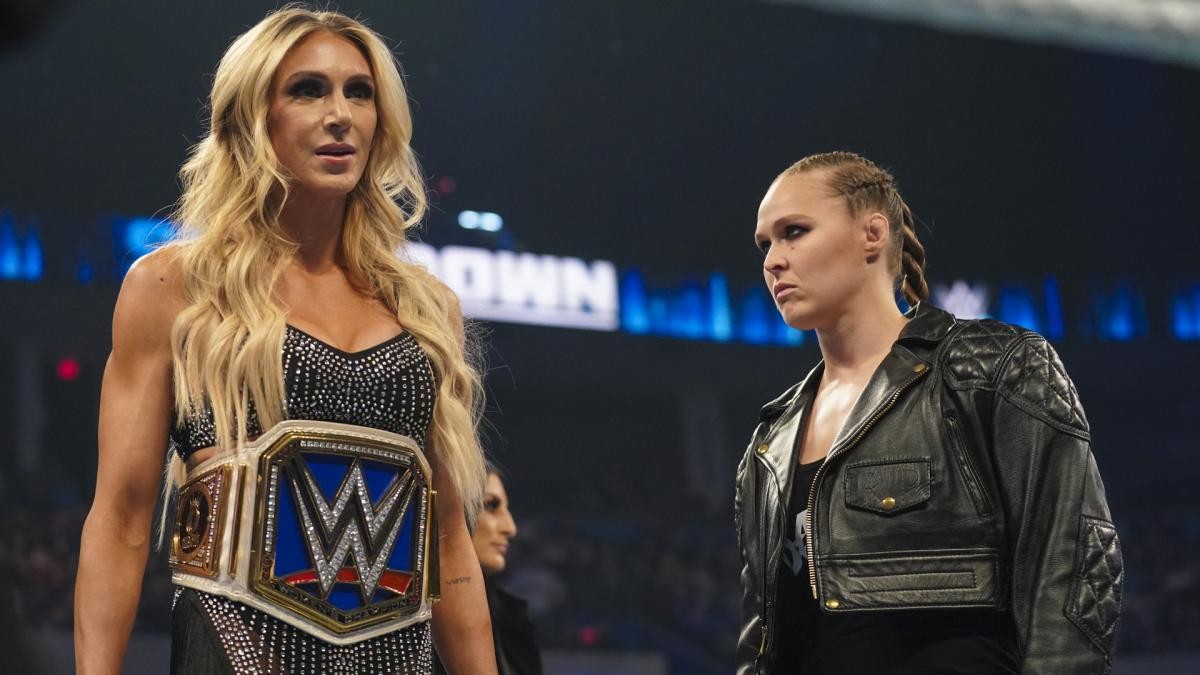 At the Elimination Chamber Premium Live Event, Round Rousey proved yet again why she is ‘The Baddest Woman on The Planet‘. With one arm tied to her back, Rousey still dominated the tag team match between Naomi and her against Charlotte Flair and Sonya Deville. Charlotte Flair only chose to get involved when Rousey’s back was turned. The match came to an end when Rousey locked in the arm-bar on Sonya Deville. Rousey did it while locking eyes with Charlotte. The Queen refused to get involved. With less than 6 weeks away what is next for two? How will they build to their match at WrestleMania 38?

Will Ronda Rousey show up on SmackDown?

We all know that Rousey is a prizefighter. Rousey is not a regular on TV. She has been part of the past 3 smackdowns back to back, but will she make it a 4th? I think that is a no-brainer. She needs to be showing up on a regular. Rousey is a money drawer, she puts butts in seats. As we all know, SmackDown opens with the Tribal Chief, Roman Reigns. From now on, leading up to WrestleMania 38, Friday Nights should be closed by the Baddest Woman on The Planet.

This week we can have the main event as Charlotte Flair vs Naomi in a rematch from 2 weeks ago. Another great match and the Queen prevails again. Charlotte hits Naomi with another Natural Selection after the match. The Queen then stands over Naomi, raises her title. Ronda’s music hits and she walks out with an angry face as usual.

As Rousey walks into the ring, Charlotte slowly steps back. Rousey gets the microphone and asks Charlotte if she is scared. Charlotte breaks out laughing, Rousey steps forward and Charlotte almost jumps out of the ring instantly. The Queen looks at the fans, the camera zooms in onto her face and we all can see the fear in Flair. This time Rousey is laughing, she again taunts Charlotte acting like going for a punch and then she walks away.

Just as Rousey is about to exit the ring, Charlotte attempts to attack Rousey. Rousey turns around just in time, and Charlotte steps back yet again. Rousey charges at Charlotte and the Queen retreats and leaves the ring. But she is missing something, it is her title. Rousey takes the title and raises it as she points to the WrestleMania sign. With that the show comes to an end.

I personally believe that both Charlotte and Rousey should not get physical anymore until WrestleMania 38. With 2 weeks left before their match, we should have a ‘Beat the clock‘ challenge between the two and the winner will choose a stipulation for their match. Rousey comfortably wins and will choose the stipulation on the go-home show. The last time these two women faced each other in a singles match, Charlotte beat the living hell out of Rousey with a Kendo Stick. Rousey has not forgotten, she makes the match a ‘Falls Count Anywhere’. This will be the best WrestleMania main event in the last decade.

Are you looking forward to seeing Charlotte Flair put her title on the line against the Baddest Woman on the Planet? Let us know.