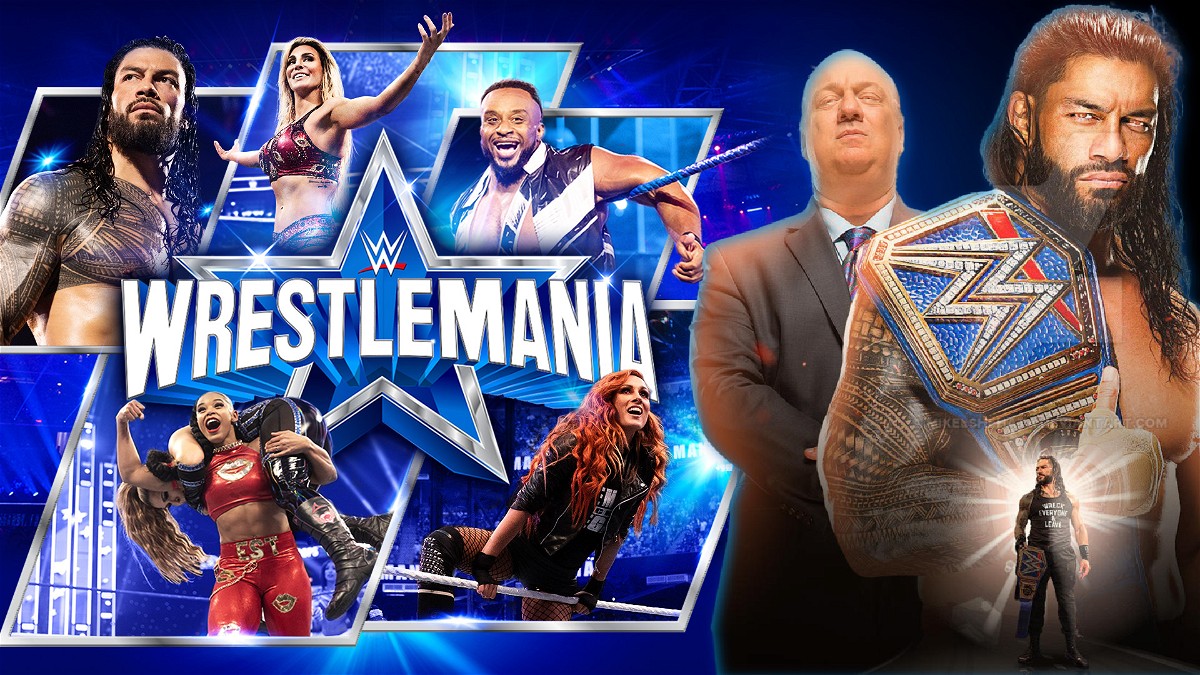 The Tribal Chief, The Head of the Table, Roman Reigns has been ruling WWE ever since making his debut. From being the Juggernaut to the Big Dog and now Roman Reigns has climbed to the top of the hill, establishing himself as the Tribal Chief. Reigns began to shine as a singles star at the 2014 Royal Rumble match. Reigns broke Kane’s record of 11 eliminations in a single Rumble with 12 eliminations. The following year, the Tribal Chief won the Rumble and went on to main-event WrestleMania for the first time in his career. Since then he has headlined the grandest stage on the regular. Let’s take a look at all his WrestleMania main events.

This was the first time Roman Main-evented WrestleMania. Reigns challenged Brock Lesnar for the WWE World Heavyweight Title. The Big Dog established himself as a Main-Event Superstar at this show. A long and hard fight for the Big Dog. Lesnar was all busted open and struggling to even stand up. It looked like Reigns was going to earn his first World Title, but his hopes were tarnished by Seth Rollins. Rollins cashed his Money In The Bank contract to win the match and win his first World Title.

Taking out the authority

Since late 2015, the Big Dog was tormented by the Authority. A feud that had been growing for over 6 months, finally culminated at WrestleMania 32. Triple H and Reigns battled for almost 40 minutes. The match came to an end with the Big Dog winning the WWE Title.

The Big Dog eliminated the Undertaker at the 2017 Royal Rumble match. Not only that he stared down the Dead Man. It was decided at that moment both will fight each other at the grandest stage of them all. The Undertaker had only lost once in 24 WrestleManias. Roman became the second person to defeat the Undertaker at WrestleMania. The following night on Raw, Reigns cut his best promo ever.

A rematch for the ages

3 years later, The Big Dog finally got his rematch against Brock Lesnar. This time around it was for the Universal Championship. The result though was not what Reigns had hoped for. After another brutal match, this time around, Reigns was the one bleeding and took a lot of damage. Lesnar kicked out of multiple spears, the Big Dog kicked out of multiple F-5’s. Everyone expected Reigns to win, but in the end he suffered 1 F-5 too many and was pinned by Brock Lesnar.

He smashed them, stacked them and pinned them

The Tribal Chief’s Universal Title was in jeopardy at WrestleMania 37, when he was in a triple threat match against Edge and Daniel Bryan. Heading into the match, the Head of the Table had promised to do one thing, “I will smash them, stack them and pin them.” He said that and went on to do exactly that.

What will happen this year?

Lesnar and Reigns have battled each other several times and twice at the Grandest Stage of them all. The Tribal Chief has come out in the losing end on both occasions. This time around, he is in ‘God Mode‘ and maybe 3rd time is a charm and the Tribal Chief will prevail. WrestleMania 38 is 2 nights and without a doubt, The ‘Title vs Title‘ match will main event one of the nights.

Do you think Lesnar will defeat Roman yet again at WrestleMania, or will the Tribal Chief remain on top? Let us know.