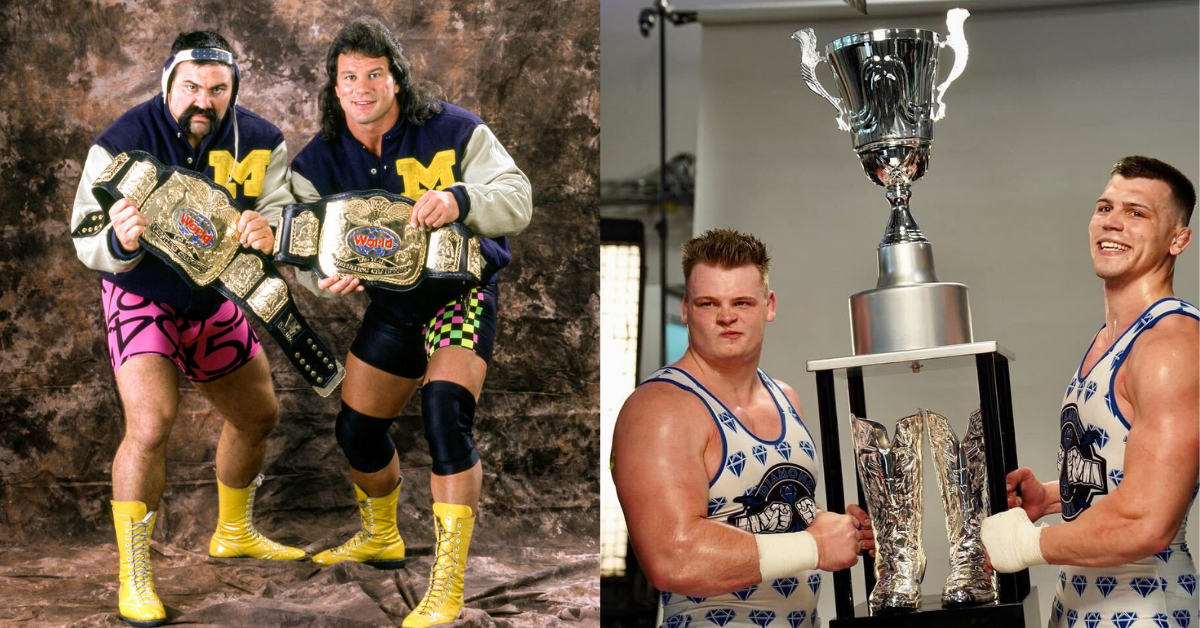 WWE has given itself a reputation for prioritizing the entertainment aspect of Sports Entertainment a tad unnecessarily; and rightfully so, in our opinion. But with their Next In Line Initiative, WWE are re-positioning the spotlight on the Sports aspect of their product. And if they want to prove that they are still the best “pro-wrestling” company in the world, they need to call up The Creed Brothers ASAP.

The Creed Brothers have the perfect gimmick already

Julius & Brutus Creed are real-life brothers, and that itself makes their gimmick pretty reliable. WWE has a history of employing sibling tag teams and pushing them to the moon: The Wild Samoans & The Usos come to mind immediately.

Of course, no member of The Diamond Mine is known for their niceness, and these siblings are more ruthless & sadistic than even their stablemates.

Julius & Brutus are currently cutting their teeth as individual characters down in NXT 2.0. But if you ask us, they have the perfect gimmick already: 2 heavyweight athletes at the peak of their youth, who also happen to be brothers. Malcolm Bivens is really just their mouthpiece at this point; once they polish their mic skills, they’ll be the total package.

The Creed Brothers have an established amateur wrestling background

Gable Steveson was drafted to Raw last year, and he still hasn’t had his first match in WWE. Though they made sure to play up his 2nd NCAA Division I Heavyweight Championship victory at WrestleMania 38; across both nights.

The Creed Brothers are both 2x NCAA All-Americans. Brutus Creed (real name Jacob Kasper) is also a 3x Academic All-American, while Julius Creed (real name Drew Kasper) ended his final year in amateur wrestling with a perfect 30-0 record. They could legitimize WWE’s main roster with their mere presence, and can put on fantastic matches any night of the week.

Rick & Scott Steiner wowed the entire world with their athleticism and insane physique in the 80s & 90s. The Steiner Brothers were inducted into the WWE Hall of Fame this year; and it looks like WWE has found themselves their next iteration.

Julius & Brutus Creed already look like genetic freaks. And last week on NXT 2.0, they proved that they can carry any tag division on their backs with their fantastic babyface performance in the NXT Tag Team Championship Gauntlet Match.

WWE has a severe lack of top babyface tag teams on the main roster. Except RK-Bro, there is no one who can credibly be called “good guys”. By calling up The Creed Brothers, they can fix multiple issues at once, and create brand new mega-stars in the process; something WWE loves doing.