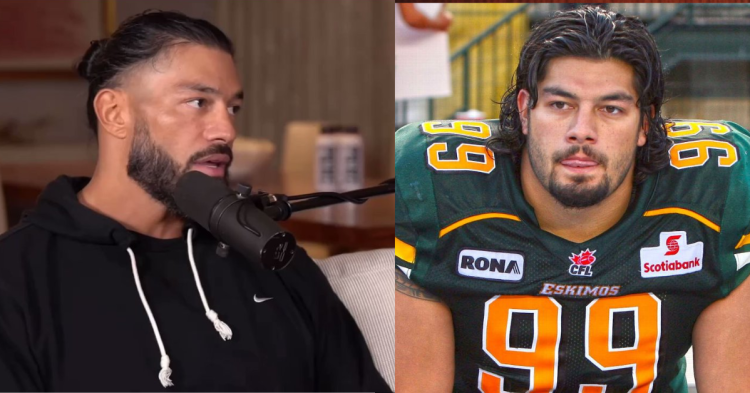 In a latest interview with Logan Paul on IMPAULSIVE, Roman Reigns opens up about his battle with Leukemia and how it ended his dream of becoming an NFL Pro.

Before becoming a WWE Superstar, Roman Reigns was an NFL player. In his latest interview with Logan Paul on IMPAULSIVE, Roman opens up about his battle with Leukemia and how it ended his dream of becoming an NFL Pro.

Roman Reigns was drafted to Minnesota Vikings in the year 2007 as part of a Free Agent. According to Roman that was the first time he saw Lab reports suggesting that he might have Blood Cancer. After Logan asked Roman about it he said, “We were not sure about it, it was the first time we saw it in the lab Reports and all the tests and all. The Blood test showed an elevated White Blood Cells count which clearly says your body’s attacking itself, so they were like it could be anything venereal disease, infection, cancer all I heard was cancer and I was like Woah and it felt super heavy. Then I had to get back home from Rookie camp in Minnesota.”

Upon getting asked about how was that moment and what it felt like, Roman said, ” I compartmentalize emotions sometimes so I think it was just so overwhelming that it wasn’t even believable. This is back in ’07, we hear about younger people having blood cancers now more often but back then a 21-year college-level football player was supposed to be at peak health conditions so you never expect that and it puts a huge asterisk on my name when I came to NFL.”

Roman Reigns in NFL: How successful was Reigns in his short NFL career?

Before getting into the Wrestling business The Tribal Chief Roman Reigns was an NFL Player and Played for Multiple Teams from the year 2007-08 before retiring due to Leukemia. Let’s take a look at his NFL career.

Leati Joseph Anoa’i aka Roman Reigns during his senior year, the Pensacola News Journal named him Defensive Player of the Year. He played football for 3 years at Pensacola Catholic High School and one year at Escambia High School.

Roman wasn’t selected in the 2007 NFL Draft, but the Minnesota Vikings signed him in May of that year. After his team physical, a leukemia diagnosis was made, and he was later released. He was signed by the Jacksonville Jaguars in August 2007, but less than a week before the start of the 2007 NFL season, Roman was cut loose.

The Canadian Football League’s Edmonton Eskimos acquired his services in 2008. (CFL). Roman, who played for the Eskimos for one season and wore the number 99, appeared in five games, starting three of them. Roman’s most notable performance came against the Hamilton Tiger-Cats in September, when he forced a fumble and shared the team lead with five tackles. On November 10, Roman was let go by the Eskimos, after which he announced his retirement from the game.