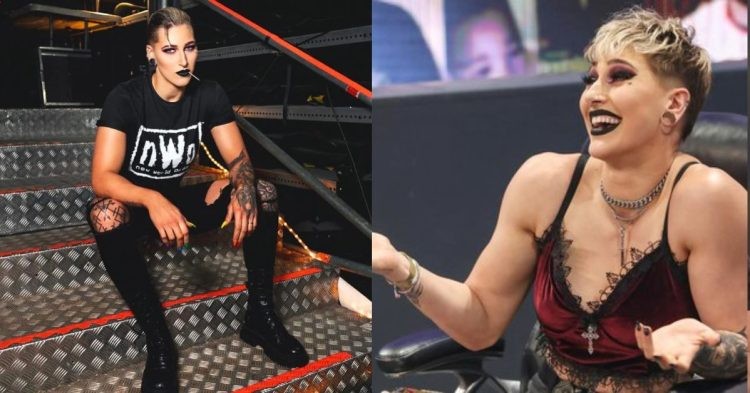 Rhea Ripley has been on the run since her main roster call-up. Upon joining the faction ‘The Judgement day’ along with then leader Edge and Damian Priest she turned to a full. The reason why this WWE Superstar is the audience’s favorite can be found in her most recent action.

After being struck and falling to the ground at ringside, Rhea felt the urge to reach out and untie a fan’s shoelaces. She actually did it, and the moment she immediately begins to feel the pain afterward is pure gold.

This is the greatest thing I've ever seen a wrestler do to a fan. 😂😂😂😂 #WWERaw pic.twitter.com/cArGjQIRju

The incident in question occurred during a Live Event when Superstars are known to act much more out of character and generally have a lot more fun. They can have fun themselves a little bit more because they aren’t being broadcasted.

But in today’s world of social media, nothing goes ignored, and this interaction between Ripley and the fan immediately gained notoriety after being dubbed “the greatest thing a wrestler has ever done to a fan.”

Following Ripley’s character breaking at a WWE live event fans were quick to tweet their reactions on Twitter and the reactions are priceless.

She really unlaced his shoe💀😭. That's not cool.

Step back, MJF. There's a new best heel in town.

I cant believe anyone could do such a heinous act.

Fans on Twitter have undoubtedly enjoyed witnessing Ripley in this attitude and cheering her snarky actions with the ringside spectator.

Also read: Who Should Be the Fourth Member in Edge’s Faction the Judgement Day?

Rhea has been in the limelight for a few days now. From body slamming Big LG Luke Gallows to taking Twitter to create some heat after her name. WWE Superstar Rhea Ripley recently claimed that ‘Judgment Day’ runs Mexico while sharing a fan video on social media.

The former NXT Champion recently mocked WWE fans in Mexico on social media. The Nightmare recently released a fan video of herself entering the ring at a WWE Live Event in Mexico on her Twitter account. Ripley made fun of Mexican WWE fans in her caption by saying that ‘Judgment Day’ runs the country.

Rhea has proven again that she is not only a talented in-ring performer but also a complete package of a pro wrestler. Fans believe she might get a huge push soon as she is one of Triple H’s personal favorites. We might see Rhea challenging Bianca soon for the Raw Women’s title and have a long run as a champion.