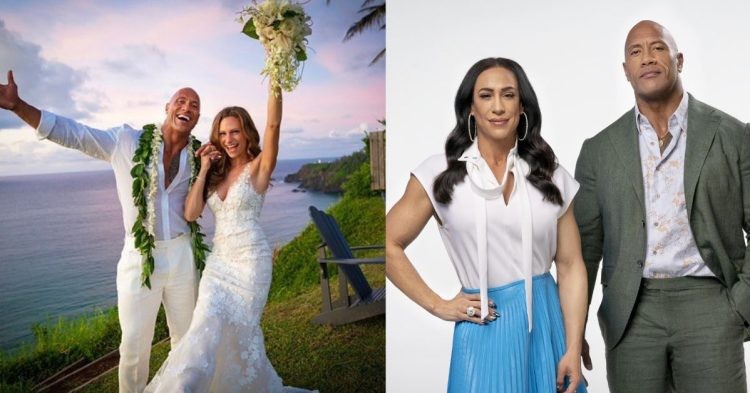 50-year-old actor, producer, and former pro wrestler Dwayne Johnson seem to have had a bit of a turbo-charged career. Dwayne’s career has been nothing if not extensive and outstanding, starting with his star-making performance in The Scorpion King in 2002, continuing with Tooth Fairy in 2010, Red Notice in 2021, and beyond. The star credits his marriage to singer Lauren Hashian, 37, who is also the mother of his two youngest daughters, for a large portion of his pleasure.

When Johnson was filming the comedy The Game Plan in 2006, the actor and music producer first crossed paths, and they subsequently began dating a year later. They have provided us with countless peeks of their love story on the red carpet and on social media since becoming public with their relationship. Johnson and Hashian married on August 18, 2019, after welcoming children Jasmine Johnson and Tiana Johnson in December 2015 and April 2018, respectively.

“Seeing our wedding moments will always fill my cup with the purest gratitude and emotion…” In August 2020, Lauren shared a beautiful wedding video on Instagram along with a message regarding their first anniversary.

And they're hitched! @TheRock and #LaurenHashian just got married in a gorgeous dreamy wedding 👰🤵 pic.twitter.com/n9Kw7JsJ6S

Fans immediately flocked to the comment box with congratulations after The Rock shared a photo from his wedding day on Instagram. Given that these two never even publicly declared their engagement, their marriage really surprised us!

The previous world champion has wed twice. Most people are aware of Lauren Hashian, his current spouse, whom he wed in 2019. Dany Garcia, his ex-wife, is however a mystery. At the University of Miami, Dany Garcia double-majored in international marketing and finance, where she also met Dwayne Johnson. She was 21 and the WWE great was 18 when they first met. Shortly afterward, they started dating, and on May 3, 1997, they got married.

The divorce between Johnson and Garcia was formalized in May 2008. However, they have since kept their close bond. In actuality, The Rock’s ex-wife continues to run his business. Entrepreneur, bodybuilder, and movie producer, Garcia. Garcia Johnson’s manager and the two of them have a number of joint investments.

They also share ownership of the production business Seven Bucks, which helped produce several of Johnson’s most successful movies over the past five or so years. Johnson’s low moment in his career, when he only had $7 to his name, served as the inspiration for the name Seven Bucks.

When The Rock spoke with Oprah Winfrey during her 2020 Vision Tour, it was the first time they discussed their divorce in the public. “It was just one of those things where it wasn’t an ugly divorce. It was just… marriage wasn’t in our cards,” he said. “Great friends. Marriage wasn’t in our cards, but we both had an appetite for business and to accomplish things. And we thought, well, what if we continued to do business together?”

In addition to being one of the best performers around, Dwayne Johnson has created a name for himself as an actor, a wrestler, and a proud father. In actuality, the action star is a girl dad who enjoys having the moniker and frequently brags about it on social media.

He has three children: Simone Johnson, age 21, Jasmine Johnson, age 6, and Tiana Johnson, age 4, all of whom he shares with his ex-wife Dany Garcia. He disclosed to PEOPLE in 2021 that he had raised females, saying that doing so had made him a better father. “more tender and gentle,” adding that he and his wife are raising his two younger daughters in “an environment and a culture where there are no limits to life.”

Rock has always shown his love and has always been a supportive father to Simone Johnson. He also supported her when she decided to take pro wrestling as her career.