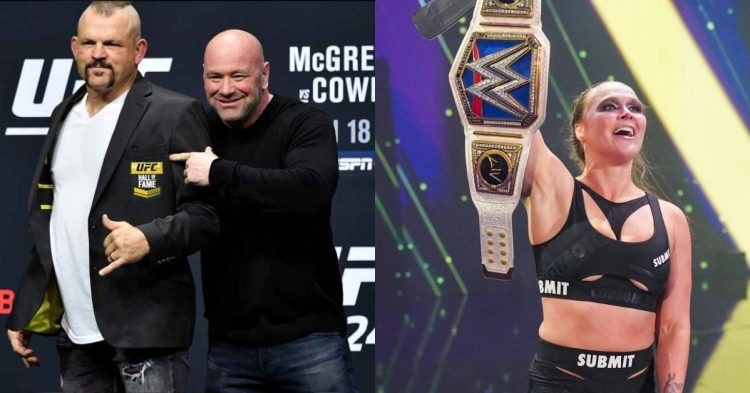 Without a doubt, Ronda Rousey ranks among the top female competitors in combat sports today. Ronda has accomplished it all, from winning an Olympic medal in Judo to dominating in the UFC to now forging a successful career in the WWE. Dana White recently discussed his relationship with Ronda Rousey and other UFC stars during an appearance on Paddy Pimblett’s podcast.

Dana began by describing how he initially hired current UFC legends when he started the business. “We had around 18 contracts when we took over UFC. The previous owner lacked the financial resources to add more fighters to the roster. Therefore, we got individuals like Chuck Liddell, Matt Hughes, Rich Franklin, and many others.”

Who are the top three UFC fighters that Dana is closest to, according to Paddy, Dana responded, “Guys like Rich Franklin, Matt Hughes, and Chuck Liddell visit me at Christmas, and on July 4th. When Mcgregor first entered the UFC, I had high expectations for him.”

However, when asked to choose just three fighters, he chose Ronda Rousey and Chuck Liddell. He went into great detail about his relationship with Ronda. He stated: “I still consider Ronda to be a very dear friend. Every time she moves into a new house, whether it be in Hawaii or Southern California, she still texts me to let me know everything.”

Ronda continued to text him, saying, “This is all because of you, thank you so much for believing in me,” according to Dana. Ronda has been always public about her respect towards Dana and has always been thankful to him.

In the WWE, Ronda Rousey made a historic debut, and she hasn’t looked back since. From being the main event in the biggest sporting event, “Wrestlemania,” to taking home the women’s title. Many people believed that Ronda Rousey wouldn’t fit in when she switched from the UFC to the WWE, but the company has always had high expectations for her. The UFC champion was turned into a WWE superstar thanks to WWE’s use of her.

On January 28, 2018, Rousey made an appearance at the Royal Rumble, going up against Asuka, the winner of the event, and the RAW Women’s Champion Alexa Bliss. She eventually made the WWE her employer on a full-time contract.

Since then Ronda has always been in the main event picture. She has won the SmackDown Women’s Championship twice; the first time was at WrestleMania Backlash on May 8, 2022, and the second time was at Extreme Rules on October 8, 2022. She is currently the champion.

Additionally, she won the RAW Women’s Championship once, on August 19, 2018, at SummerSlam. In 2022, she also won the Women’s, Royal Rumble. So far, Ronda had an amazing career in WWE and still has a lot more to achieve.