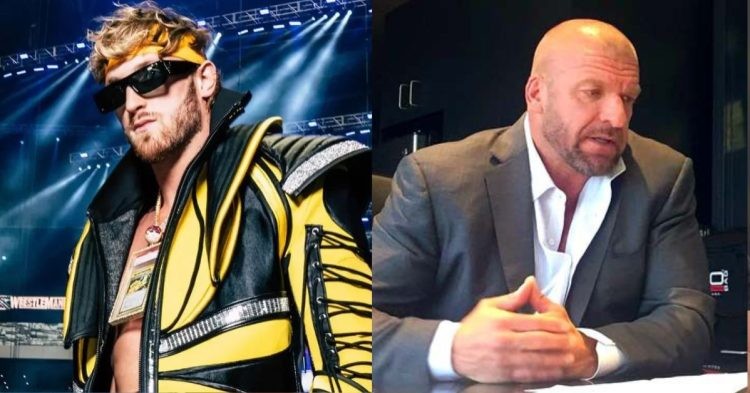 Logan Paul even before he agreed to become a full-time WWE superstar, gained the respect of Triple H. The newly appointed head of WWE Creative has acknowledged that Paul’s enthusiasm for the game has left an impression on him.

Ahead of facing Roman Reigns at Crown Jewel for the Undisputed Universal championship, Logan Paul recently had a conversation with Vicente Beltrán. Paul spoke about his friendship with Triple H and why he wished the retired 14-time world champion could text him more often throughout the interview.

Working with Triple H, according to Logan, has been amazing: “Triple H is an incredible man. He’s very generous with his time and his energy and he’s so intentional when he speaks and when he gives me advice, I know that every single word that comes out of his mouth is extremely valuable. So he takes the time to point me in the right direction and guide me.”

Logan continues by stating that Triple H doesn’t always reply to his texts: “The one thing that he hasn’t done just yet responds to any of my text messages. Triple H, if you’re watching this, just, please. I’m three texts deep with no response.”

He continues “I don’t know if you’ve seen ‘em but I’m feeling desperate and I’m just afraid to send that fourth because rejection — some say rejection is redirection but where am I going? Triple H, just please respond to my texts.”

At Crown Jewel in Saudi Arabia, Logan Paul is scheduled to face Roman Reigns for the Undisputed WWE Universal Championship. It’s going to be his third match in the WWE overall. Paul said in an interview that he is eager for the match and that he will have the chance to learn on Saturday.

Logan said, “I love knowledge, and when I take on the GOATs it’s an opportunity for a masterclass for me. When I fought Floyd Mayweather, I wasn’t just fighting Floyd Mayweather, I was paying attention to every single nuanced movement that he did. One time I was by the ropes and he had me under his arm, dude covered my mouth with his glove and stopped my breathing for like two breaths.”

“An advanced move that only Floyd Mayweather would know because he has been boxing for 40 years. I’m positive Roman’s going to have some stuff up his sleeve and I’m going to be paying attention to all of it and use it and put it in my arsenal for when I become the WWE Champion,”

The social media sensation expressed a strong sense of confidence in his ability to beat Roman Reigns and win the appreciation of the WWE fanbase. Let’s wait and watch if he succeeds in dethroning The Tribal Chief.