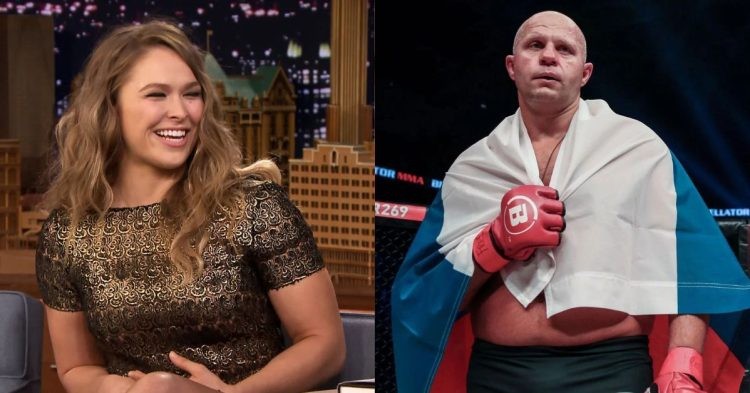 Ronda Rousey, confessed that she has a thing for Fedor Emelianenko. (Credits: Glamour)

The former UFC women’s bantamweight champion, Ronda Rousey, has a thing for retired Russian veteran Fedor Emelianenko. During a meeting with members of the press in Los Angeles in January 2014, Ronda Rousey joked that she wanted to have 57 children with him.

Rousey admitted to having a crush on Fedor Emelianenko nearly three years before marrying Travis Browne. Ronda said, “Do I want to have 57 of his babies? It’s true. I think he’s married, though, so I’m not allowed,”.

Fedor Emelianenko is a retired Russian mixed martial artist with a professional MMA record of 39 wins and 6 losses. He is considered one of the best MMA fighters in history and is known to his fans as the “Last Emperor.”

The former UFC Bantamweight Champion claims that watching recordings of Fedor fights was her first true introduction to MMA. That video was enough to make her fall in love with the sport and the “Last Emperor” himself.

Ronda said “He’s always been my image of what MMA is supposed to be. So, I will always be not so secretly in love with Fedor Emelianenko. And he’s the only big MMA star that I haven’t met yet. That’s ok because if I did I would probably turn nineteen shades of red and faint.”

Emelianenko began his MMA career in 2000, and after capturing the Pride Fighting Championships heavyweight title in 2003, he quickly established himself as a formidable force in the sport. He is regarded as one of the greatest to have ever done it.

How many children does Ronda Rousey have with Travis Browne?

Travis Browne and Ronda Rousey, two UFC mixed martial artists, married on August 28, 2017, in Hawaii. On April 20, 2017, the couple announced their engagement. Browne proposed to Rousey beneath a waterfall in New Zealand.

Ronda Rousey gave birth to her first kid on September 28, 2021. She had her first child with her ex-UFC fighter husband Travis Browne. The couple had previously decided on La’akea Makalapuaokalanipo Browne as her name. Browne already has two sons from a previous relationship, Keawe and Kaleo.

Rousey revealed her intention to start a family immediately after losing her high-profile match at WrestleMania 35. She took a break after giving birth to spend time with her newborn before returning to WWE and winning the Royal Rumble in 2022.

Ronda has established herself as one of the pioneers for women in the sport of mixed martial arts (MMA). She initially transitioned well to WWE, yet her current run in WWE is receiving a lot of criticism from the WWE Universe. As a result, WWE decided to strip her of the SmackDown Women’s Championship, forcing her to lose it to returning Charlotte Flair. WWE is now advertising her for the 30th Anniversary episode of RAW.