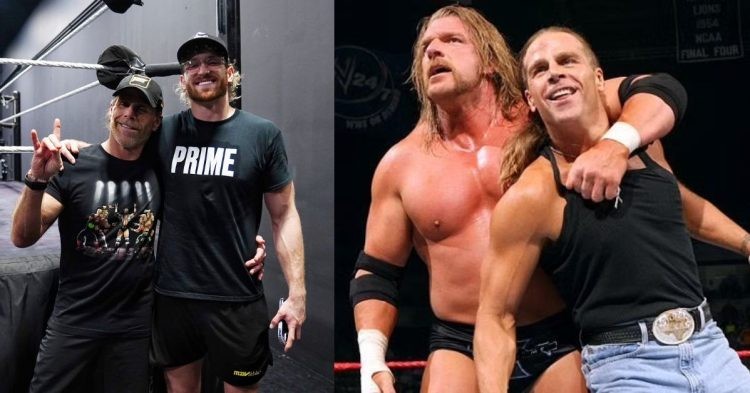 Shawn Michaels recently talked on the ImPaulsive podcast about how Triple H saved his life and stood with him even though he was the most hated figure in the business. “I know everybody can only see him now as the head cheese, but he wasn’t then. I was the top dude at that time, and he was the guy still waiting for his first break, and he was a friend of mine.”

He also added “He was the best friend of the most hated guy in the company and in the business. And he never left my side. He could’ve thrown me under the bus at any point, saved himself, you know what I mean? (…) For me, that’s the kind of stuff I can cry about, but how can I not give every ounce of myself for whatever he needs me to do?”

The relationship Shawn Michaels had with Triple has benefited him now. He is currently responsible for leading NXT, making him a crucial component of WWE’s future.

Shawn Michaels reveals where the DX “suck it” chop came from

For their 25th anniversary, the legendary group D-Generation-X returned on October 10 at WWE Raw at the Barclays Center in Brooklyn. To promote the event, Shawn Michaels spoke with The Post. Michaels discusses the iconic “suck it” crotch chop’s history.

“The first place I remember seeing it was Sean Waltman, who was then known as 1-2-3 Kid and later X-Pac, doing it over in the UK,”  Michaels said. “Then all of a sudden, we were doing it as a group, to each other, kind of thinking it was funny.”

Waltman was the first person to perform the crotch chop in the ring, according to Michaels. On the Raw program from October 6, 1997, when Bret Hart declared Michaels “nothing more than a degenerate,” Michaels performed it for the first time. The DX name would be seized by Michaels for the stable alongside Triple H and Chyna the following week.