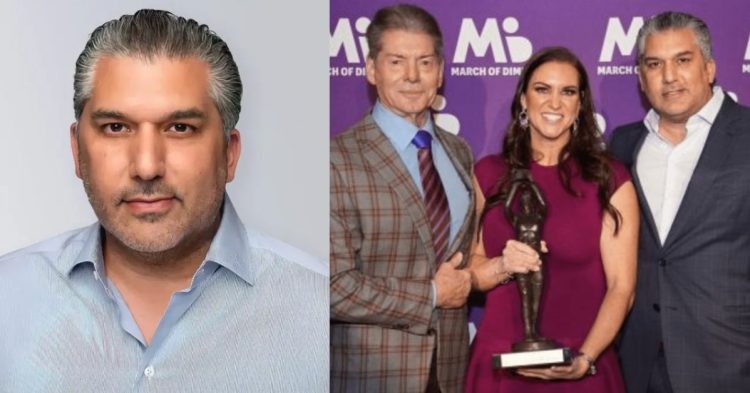 Nick Khan is well-known in the WWE universe and serves as the company’s president and chief revenue officer. Khan left CAA in August 2020 to join WWE. While there, he gained the respect of his new employers by securing domestic media rights deals that were 3.6 times more lucrative than their prior arrangements.

The full interview with Nick Khan and @arielhelwani can be found here ➡️ https://t.co/IquKp1Cj59 pic.twitter.com/xHTywwPkTV

He was born and raised in and is a citizen of the United States. Nick attended the University of Southern California and its School of Cinema-Television for his higher studies. He goes by the name Nick Khan in normal conversation, but his actual name is Nicholas Khan.

Khan joined the Creative Artists Agency (CAA) in 2012, a network of talent agencies that specializes in generating chances and business for those they represent. Khan represented a variety of on-air celebrities as the co-head of television. He gradually rose to become one of CAA’s most renowned agents, switching from representing individuals to large corporations.

Khan represented WWE among other groups. Khan’s accomplishments at CAA and his skill set impressed Vince McMahon. After eight productive years at CAA, Nick Khan made the move to WWE, where he served as the company’s president and chief revenue officer. He took the place of Michelle Wilson and George Barrios.

At the age of 77, Vince McMahon made his retirement announcement from WWE on July 23. The company’s president Nick Khan and Stephanie McMahon were appointed as the new co-CEOs.

Is Nick Khan related to the McMahon family?

Nick Khan has spent his entire life working in the entertainment sector, but he only formally joined WWE in August 2020. Khan has a long history with the WWE due to his prior employment with the Creative Artists Agency, also known as CAA, one of the major talent agencies in the world, despite his current position inside the organization.

Technically speaking, Nick Khan is not Vince McMahon‘s successor. Khan behaves in a way that is reminiscent of a cunning businessman who puts his company above all else. His primary concern is the WWE’s financial situation, both now and in the future, and the several revenue streams available to the business.

More money means more possibilities, including the possibility of the WWE being sold to Disney or NBC in the future or the corporation growing in other ways.

Another reason why Nick Khan gained so much power within the WWE is Nick’s “Ruthless” nature of handling the business and deals reminds Vince McMahon of himself.

Fans of the WWE may be most aware of Dwayne “The Rock” Johnson, a well-known wrestler and Hollywood legend who recently astonished everyone by admitting online that he and Khan are actually good friends and even attended the same school.