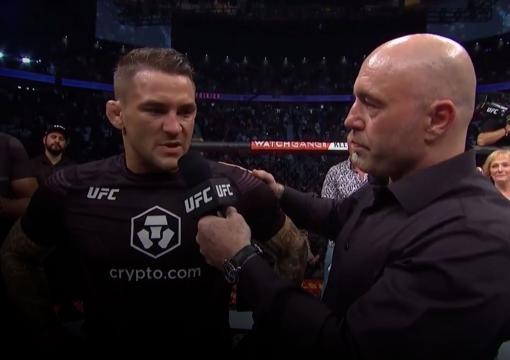 Dustin Poirier has Beaten Conor McGregor and won the trilogy bout at UFC 264. The doctor called out the fight after the end of the first fight considering Conor’s foot injury. Poirier was dominating the fighting in the first round. However, Conor wasn’t happy at all after the incident and constantly calling out Dustin from his corner. Poirier didn’t set back and started mocking him. Just after winning the bout, While replying to Conor Justin said “shut your b**** a** up”.

Joe Rogan then came in for the octagon interview and congratulated him. He asked about Poirier’s thoughts on the fight and Conor’s injury. To which the Diamond replied, ” He fractured it at one of the checks at the beginning of the fight“. When Joe asked about Conor getting personal against him while leading up to the fight he replied

“There is no holds barred with the trash talk. But, murder is something you don’t clown around there is no coming back from it. Murder me… all kind of stuff… You don’t talk like that to people. I hope he goes safe home to his beautiful family.”

Just then the crowd started booing him and Dustin instantly shut them down and said “Everybody booing, you can kiss my whole a******” He was then asked if he is happy with this kind of win to which he replied “ Karma is not a bitch. It’s a mirror. This guy said the wrong things and I have been buzzing my A** off… I beat the guy“. Poirier believes it’s a fair n clear win for him. He even mocked Conor by doing his signature strut while he was down with an injured knee.

Fight fans are certainly upset about how the bout ended. However, Conor Vowed to Return After a horrific leg injury at UFC 264.

“I Am in” – Jorge Masvidal Responds to Gilbert Burns’ Call-Out at UFC 264: Dustin Poirier vs Conor Mcgregor 3