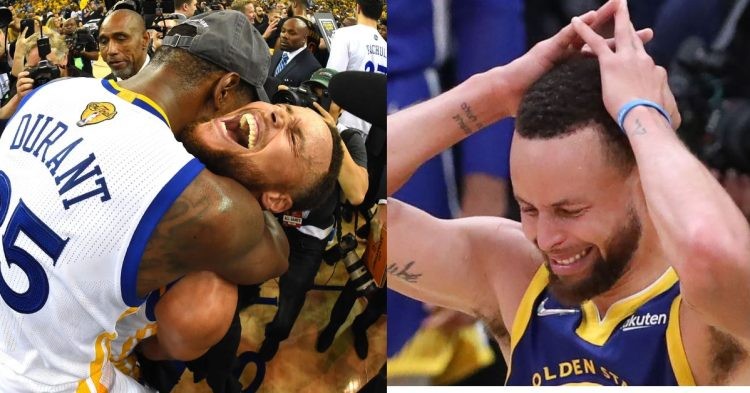 Golden State Warriors superstar Stephen Curry is coming off one of the best years in his career. He carried the Warriors to their 4th title alongside a core with Klay Thompson and Draymond Green. Avid NBA fans will remember that Golden State was at its peak when they had Kevin Durant.

KD helped GSW win back-to-back titles by crushing LeBron James and the Cleveland Cavaliers in 2017 and 2018. Curry played quite well in those 2 finals series and averaged 27 points. He recently revealed how his most recent NBA title in 2022 is worth more than the ones he won with Durant.

We already know that Chef Curry won his first NBA Finals MVP this year. However, perhaps that is not the only reason this title matters more.

In an in-depth interview, Curry broke down how this title matters more to him. One would assume he is saying this to invalidate Durant’s contributions to the team. However, this is shallow thinking and is not the case. Steph explained how he felt after winning each title.

“You don’t find me ugly crying on the court for no reason. That raw emotion that came out after Game 6 kind of signaled how much this meant to me, how much this meant to our team. The first [title], you don’t really know what you’re doing until you accomplish it and then you’re celebrating. The next two were kind of validation for trying to remain champions. But after these last three years, winning that one [2022], definitely the most special.”

Thus, Steph concluded that he would rather have the title “all day every day“. We are free to opine on how truthful he is being. There is a certain feeling to being an unchallenged dynasty for years. However, the sweetness of redemption and proving there is still a fight left in the team might just be better.

This NBA postseason might have seemed to be an uphill challenge for the Warriors. Several analysts picked teams like the Grizzlies and the Celtics and doubted GSW. Nonetheless, the team eliminated all opposition in 6 games and never faced an elimination game these playoffs.

Things could have easily gone the other way. They just might next time. That is why Steph felt unreal emotion and happiness after winning the 2022 NBA title.