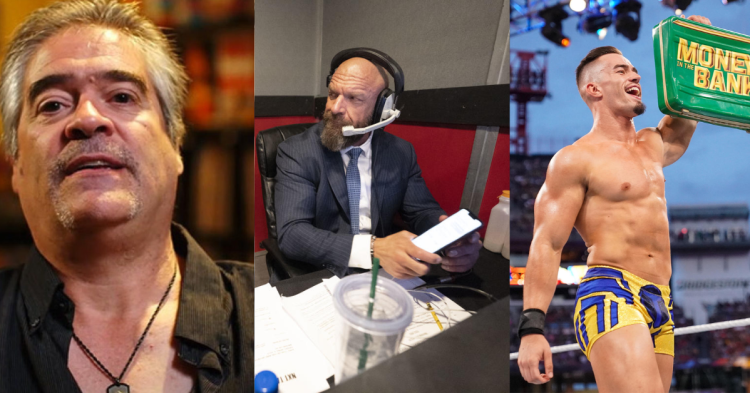 Vince Russo, a former head writer for WWE, has now criticized Triple H's recent choices made since taking over the WWE after Vince McMahon's retirement

While some online fans have praised Triple H for his efforts as WWE’s creative director, veteran wrestler Vince Russo pointed out recently how The Game’s strategy didn’t truly help the organization attract more fans. After Vince McMahon’s departure from the company, after his case of sexual misconduct came into the limelight Triple H has taken over the creative side of the business and has made several changes too. Although it got him mixed reactions, Triple H has done an excellent job so far.

Vince Russo, a former head writer for WWE, is renowned for not holding back when discussing the condition of professional wrestling today. Russo has now criticized Triple H’s recent choices made since taking over the WWE after Vince McMahon’s retirement.

At 77, time for me to retire.
Thank you, WWE Universe.
Then. Now. Forever. Together. #WWE #thankful

Recently, Russo made an appearance on Sportskeeda’s Wrestling’s Legion of RAW, where he criticized Triple H and his recent bookings: “You gotta ask yourself a question when you sit down to watch Monday Night RAW and what you gotta ask yourself is, is this show for me? And there’s a really easy way to answer that question. Look at your television set, wipe the crap out of your eyes. Look at the people on the aisle, look at the people on the ramp. Look at the people in the first five to 10 rows of this show. Are you one of those people? Are you one of those homeless marks? Grown men who have convinced themselves that this crap is real. Because if you are one of them, then this show is for you. If you’re not, then it isn’t. That’s the barometer. That’s how you could tell if this crap show is for you.”

Recently, Vince Russo made an appearance on Sportskeeda’s Wrestling’s Legion of RAW and it seemed like he decided to take a jab at every decision made by the new creative head Triple H. Vince Russo believes that by scheduling Austin Theory to lose matches on television, Triple H is seeking to exact revenge on Vince McMahon.

The Youngest Mr. Money In The Bank ALL DAY🚀 #wwe #clashatthecastle pic.twitter.com/cZw2Ugvwgb

Austin Theory was pushed a lot by Vince McMahon as a future mega-star in making. This decision was criticized by a lot of WWE fans and pro-wrestling fans in general. The fans had little to no interest in seeing a new star being pushed this hard. Triple H has been very vocal about how he listens to the fans and always tries to deliver what the WWE universe wants. Theory Faced Kevin Owens on RAW and was kind of buried by KO. Vince Russo had his own take on this booking: “This is Triple H’s way of shoving it up Vince McMahon’s backside. This is Triple H’s way of saying everybody that I believed in, everybody that I believed in, you fired,” Russo said. “Now this was the guy you believed in. Guess what bro? Now I’m gonna get him knocked out cold on Sunday, doing a job on Monday. You know how ridiculous this is?”

Vince, later on, added that he wanted Theory to be booked as a legit threat, not like a “Jobber”. He stated: “This was Vince’s guy and now Triple H is turning the tide because why in God’s name would you give somebody the Money in the Bank who you’re beating every week? The Money in the Bank is supposed to be this guy is a threat at any time to turn in that case. Not a guy that loses every match he has.”