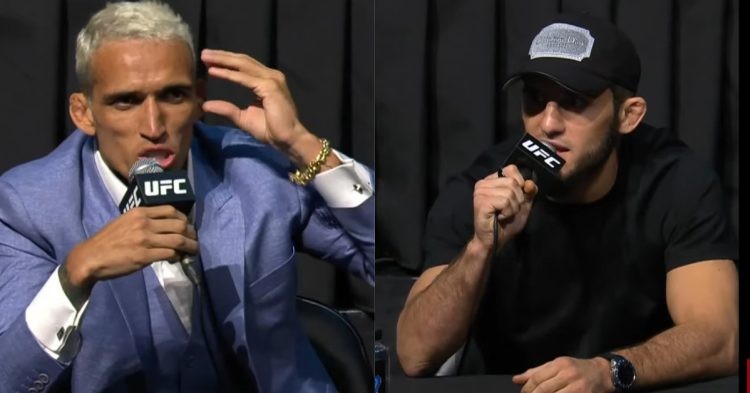 We are just a few days away before the highly anticipated UFC 280 takes place at the Etihad Arena in Abu Dhabi. It is needless to say that the major focus of this PPV will be on the main event clash between Charles Oliveira and Islam Makhachev which will be contested for the vacant lightweight title.

As we inch closer to this super fight, things are getting heated up as Oliveira and Makhachev were involved in a big argument during the UFC 280 pre-fight press conference. Do Bronx was asked about his feelings after getting booed in Abu Dhabi.

The former lightweight champion responded by alleging that the Russian lightweight rejected his offer of fighting in Brazil. After listening to Oliveira’s claims, Islam Makhachev was quick to deny all the allegations and said that he was always ready to fight in Brazil.

Charles Oliveira reacted to Islam’s response and slammed the Russian fighter and his team for making things up about being ready to fight in Brazil.

“This fight was never meant to happen in Brazil. You guys are just bulls******g all the time.”

Their back and forth didn’t stop there as they exchanged words and in this verbal altercation, Islam accused Oliveira of ducking him and instead called out fighters like Conor McGregor and Nate Diaz.

While their argument was going on fans who were in attendance at the press conference thoroughly enjoyed every bit of banter between the two main event fighters.

Both Charles Oliveira and Islam Makhachev have predicted that the fight won’t go to the distance and are confident that they will get the job done. In the recently concluded press conference, one of the interviewers asked Do Bronx why he is so sure about knocking out the Russian lightweight.

“I have all the respect in the world for this guy. But I’m a sharpshooter and I’m gonna keep pressing forward and I’m gonna knock him out in the first round.”

It would be fascinating to see these two lightweights collide for the vacant title this weekend as they are two of the best fighters in the division with impressive win streaks under their backs.

Do let us know in the comments section below who you think will win this main event bout between Charles Oliveira and Islam Makhachev.