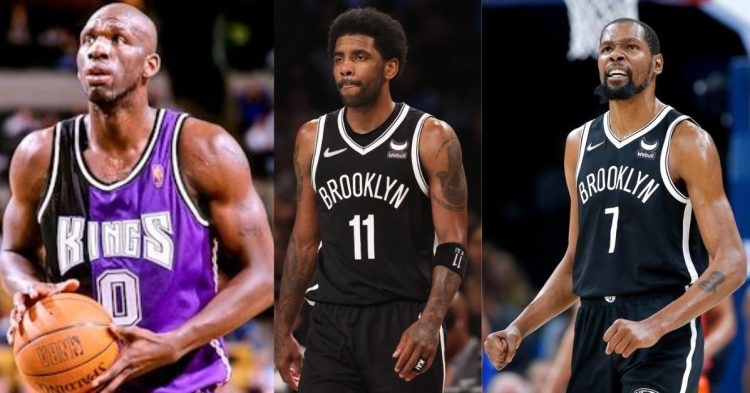 Brooklyn Nets superstar Kevin Durant recently had a back on forth on Twitter with Olden Polynice. For those who do not know, Polynice is a former NBA player who has now become a sports journalist. He played the center position for the 15 seasons in the league and is from Haiti. Durant did not like the story Olden is being accused of having cooked up.

Sports journalism is a field where a lot of assumptions have to be made. One must wonder what claims about Kyrie Irving made by Olden had KD on edge. How is it even possible to verify if a story of this nature is true in the first place?

Not many of us are aware of the origin of this story centered around Kyrie Irving. While he may be eccentric and say controversial things at times, he is a star with talent like a few others. The report by Polynice stated that Irving asked the Brooklyn Nets coach Steve Nash if he could “see Kobe’s MVP trophies“.

Relationship between Kyrie Irving and Steve Nash is “irreparable”, BSS tells @WindhorstESPN. Irving and Nash got into late March incident where “Irving asked if he could see Kobe’s MVP trophies” during team dinner at Nash’s home. pic.twitter.com/Omys8WQyeD

Kobe Bryant might be one of the most skilled players himself. He was a long-time mentor and role model to Kyrie. But, Bryant never won more than one NBA MVP. On the other hand, Nash won 2 back to back MVPs with the Phoenix Suns. This was in Kobe’s prime and people thought he was snubbed. Therefore, Irving is reported to have mocked Nash with the notion that the trophies weren’t his.

Who really deserved the MVP those years is a discussion for another day. What is more important, is that the story appears to be completely fabricated. Kyrie never said anything similar to Nash. However, Olden did not do his due diligence and backed the story.

Kevin Durant is the last person to let mistakes like this go unpunished. He went off on a Twitter rant against an apologetic Olden Polynice. ” There was no truth in what u said. U have no impact on anything Olden. Enjoy retirement.”

There was no truth in what u said. U have no impact on anything Olden. Enjoy retirement lol https://t.co/XLreomiv12

These are harsh words from KD. However, perhaps they are well deserved. Sports journalists and writers should refrain from making up or supporting inaccurate stories. Even if an NBA superstar responds and the writer gets a few minutes of fame, the price is the loss of credibility.

Thus, Olden was fired and Durant mocked him by reminding him to enjoy it.