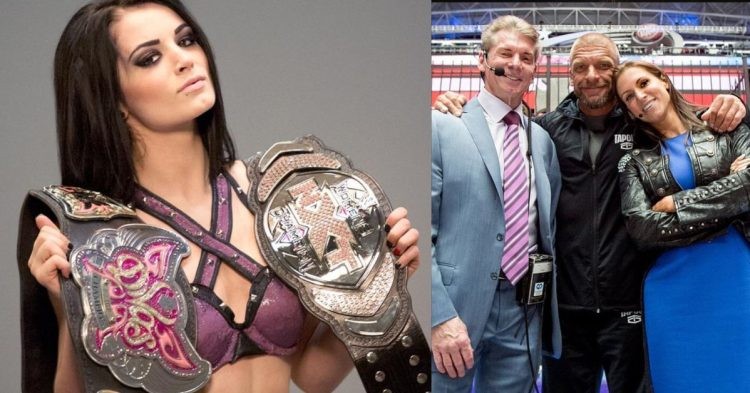 Formerly known as Paige now known as ‘Saraya’ made a shocking debut on AEW’s Dynamite last week. This week on AEW Dynamite, Saraya addressed the audience in-ring. She swore to bring about a difference in the women’s division while speaking to the crowd.

Britt Baker, Rebel, Penelope Ford, and Jamie Hayter did interrupt Saraya. Britt made a dig at Saraya’s neck injury in her promo. When Baker and the crew confronted Saraya, she talked about how happy she is to have a new boss: “I may not have been in AEW very long but I do have eyes and I do have ears. I realize you guys like to get up to some funky stuff. Since I talked to Tony backstage, It’s so good to finally have a boss that actually listens to me!”

Dr. @realbrittbaker D.M.D isn't about to let @saraya have the last word! Tune in to #AEWDynamite LIVE on @TBSNetwork! pic.twitter.com/7RNJHHfvpp

While Saraya’s promo has got mixed reviews from the audience many people have called her out for it. Saraya or Paige while back in WWE was forced to retire in 2017 due to a career-threatening neck injury. Although she retired from in-ring competition, WWE continued to have her under a special contract. She was also announced as Smackdown’s General Manager. Saraya was struggling with mental stress and WWE made sure she was alright and kept supporting her. In 2022, after she decided to not renew her contract with WWE she decided to sign with AEW in September. Many fans criticized Saraya for her statement about a company that made sure she was doing well when she was at her lowest.

Saraya defends herself on Social Media for her promo on Dynamite.

Before being cut off by Britt Baker on this week’s Dynamite, Saraya addressed the audience that she intended to bring the revolution to AEW. She fired a few shots at WWE and Vince Mcmahon in her promo which made fans upset. After facing huge backlash on Social Media, Saraya took on Twitter to express her views and clear out the motive behind her promo. She tweeted, “I say how my current boss listens to me and all of sudden it’s “So hAtE yOu WWE”. No, I don’t. I loved my time there. I appreciate the time and the opportunities I was given. Especially in my NXT days with Triple H. I’m happy now in AEW though. Tribalism in IWC is so bizarre to me”

Although she later deleted the tweet it is clear that fans didn’t like how Saraya bashed her former boss and company.