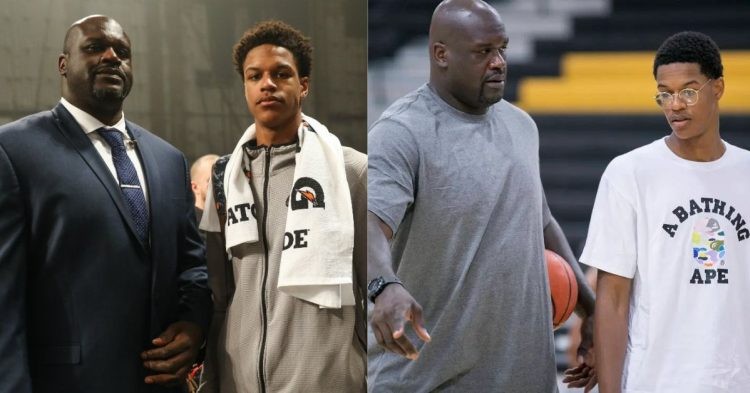 Shaquille O’Neal is one of the biggest athletes in all of sports categories. Not just because of his huge size. The legacy he has built is almost unmatched as he has become a business tycoon after retiring from the NBA. Shaq has won 4 NBA championships, 3 with the Los Angeles Lakers and 1 with the Miami Heat. The accolades he has won over the years may suggest it has all been bright for him, but that hasn’t been the case.

O’Neal came up as a child when he struggled with family issues, as his father, Joseph Toney, was a felon. Despite all this, he still made it to the NBA, cementing his place as one of the greatest players of all time. In addition to that, Shaq has also been a wonderful father to his six kids. His most famous child would be Shareef O’Neal.

In a recent interview with with FTW USA Today, DJ Diesel spoke about Shareef and how he inspired his young son. He said, “Man, it was good. I set high standards like what my father set for me. He’s working hard. Of course, being an O’Neal kid, everyone thinks his journey is going to be like mine.”

“But I tell my kids all the time: “I’m an Amazonian that walks through the jungle. I’m crazy. Your path will never be like my path. You’ll have to choose your own path. However you’ll make it, you’ll make it.” He decided to go early. He had a good summer league and he will be in the G League. He still has a chance to fulfill his dream,” O’Neal added.

In the 2022 Summer League, Shareef played for the LA Lakers. He averaged 4.7 points and 3.7 rebounds for  10. minutes per game. After that, his career took a turn as he chose to enter the NBA Draft this year. The interesting point to note is that his father Shaq did not share the same opinion on this. “He wanted me to stay in school,” he said about Shaq. Shareef is currently a G League Ignite player.

As Shaq mentioned, Shareef will not have the same path as his father. The 50-year-old was not lucky enough to have a father to guide him, but that is not the case for Shareef. Although the big man might be hard on him at times, it will only be for him to become the best version of himself.
Tags: Shaquille O'NealShareef O'Neal
Previous Post