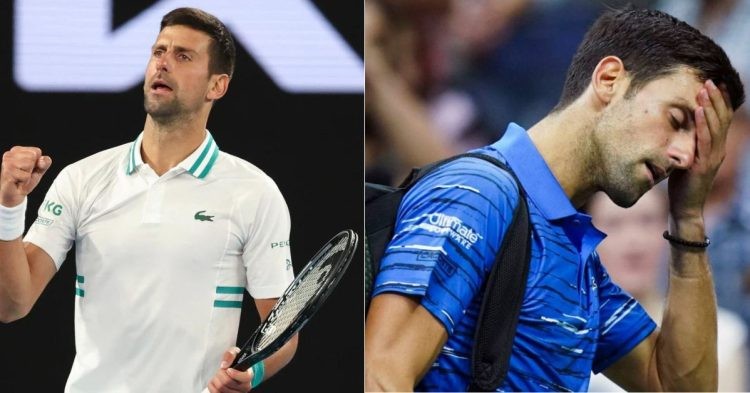 Novak Djokovic has been part of an active debate about the ‘GOAT’ of tennis. Unlike Roger Federer and Rafael Nadal, who have openly stated that they do not care about the GOAT tag, Djokovic has a different approach wherein he claims himself to be the best and the GOAT of the sport.

He has done this multiple times and if we take a trip down the memory lane to the ATP Finals in 2010 during which both Rafael Nadal and Novak Djokovic got winning starts. However, due to the round-robin format of the tournament, they were supposed to face each other in the second round.

Nadal won the match with a 7-5, 6-2 which highly annoyed the Serb. He apparently had an eyesight issue which made him lose his focus and he was even forced to take a medical timeout before the match. He even criticised the umpires and said they did not give him enough time to rectify the issue.

He was disappointed and angry with himself for what happened in such an important match.

Novak Djokovic withdraws from the US Open

The entire tennis fraternity is aware of Novak’s stance on the COVID-19 vaccine. His reluctance to take the vaccine has already cost him his title chance at the Australian Open, and it seems his US Open chances are also hindered.

The updated CDC rules in America specify that a COVID-19 vaccine is mandatory for entry into the country and taking this into consideration, his participation in the US Open seems unlikely. In an interview he gave to BBC after the Australian Open fiasco, he clearly mentioned that he does not care if his grand slam chances are affected due to the vaccine, however, he won’t be taking the vaccine since he is extremely conscious of what he puts inside his body.

Novak has only one grand slam title, the Wimbledon to his name in 2022 and even though he had a good chance at winning the US Open, he is all set to miss it out.