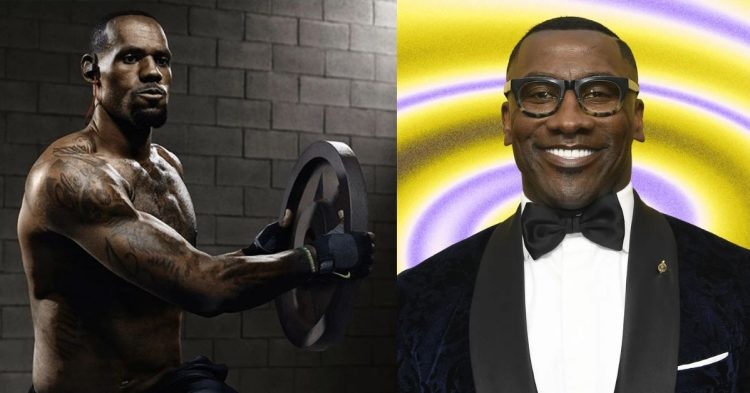 LeBron James and Shannon Sharpe (Credit- Man of Many & GQ)

The players in the NBA are absolute machines. They know how to keep themselves fit and ready for years to come. Although there may be many such players, no one comes close to LeBron James in that aspect. We all know how he has been at the top for two decades now.

As we approach the 2022-23 NBA season, James will be playing his 20th season. That isn’t a normal feat for any player, let alone a 37-year-old. We always wonder how he has managed to pull this off. The LA Lakers star is a player who follows a strict and disciplined schedule to ensure that he follows the same path. And that has played a crucial part in his path to greatness.

Sports analyst Shannon Sharpe has been known to support LeBron when his media counterpart Skip Bayless tries to criticize the player’s every move. This time around, he has praised the King’s longevity and his dedication to fitness.

How has LeBron James managed to stay at the top for 20 years?

Sharpe spoke about LeBron on an Undisputed. He said, “You’ve scored 25 points or more for 18 straight seasons, you’ve done what you’ve been able to do with consistency and the level at which you’ve played at because this is how you’ve always done. This is what the really great ones do.”

Has LeBron been in “the lab” more than ever this offseason?

“This is what he always does. This is why he’s been able to play at the level he’s played at for this length of time. This is what the really great ones do: they start early on and adopt a habit.” —@ShannonSharpe pic.twitter.com/Dfkvc2rEz4

“The really great ones start early on, they adopt a habit of training and doing it the right way and they are able to play at a level for an extended period of time. “The time he puts in the gym as they say, the lab, this is a normal occurrence to him. This is not new. He’s true to this,” Sharpe also mentioned.

We all know how LeBron treats his body like a temple. One of the most important things one has to remember is that recovery and conditioning are as important as training shooting on the court. And it seems like LeBron has made sure to prioritize that as well.

Mav Carter says LeBron James spends ~$1,500,000 per year on his body. He uses cryotherapy, hyperbaric chambers, NormaTec leg boots, etc. He also has personal chefs, trainers, etc. He has a strict routine and diet. He invested in his body, so he can still dominate at 33 years old.

A few years ago, his business partner, Maverick Carter, mentioned that LeBron spends $1.5 million a year on his body. That includes personal chefs for particular diets, trainers, etc. Now that he has become older, that may have changed.

Regardless of the money he spends, it is still astonishing to see a player maintain his longevity for this long in one of the toughest leagues in the world. If that wasn’t enough, he still puts up ridiculous numbers simultaneously.

Tai Tuivasa Weighs 273 Pounds Ahead of His Next Fight at UFC Paris, Can Ciryl Gane Overcome the Massive Weight Difference?