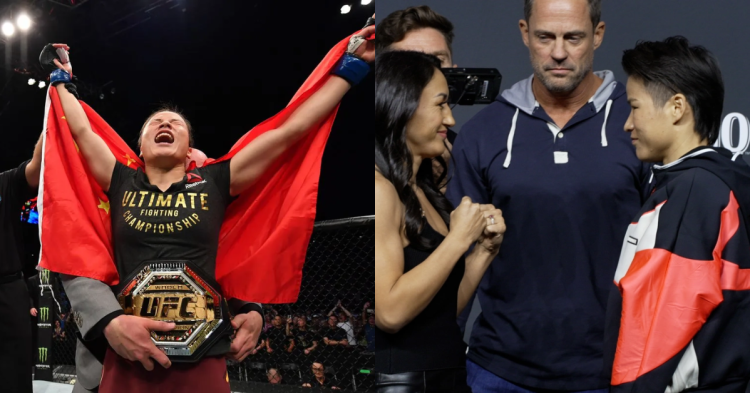 The weigh-ins are done, and the fighters have faced off. Now all that remains is for them to walk into the UFC cage as we watch the door close behind them. The women’s strawweight bout is all set to go down, with both Zhang Weili and Carla Esparza ready to get it on. Fighting out of China, Weili is a former champion and a specimen of freak athleticism. She can be compared to Michael Chandler in terms of raw power, explosiveness, and speed.

Zhang Weili currently has two title defenses and has picked up the pace in the popularity department recently. Following her loss at the hands of Rose Namajunas in a first-round knockout, Weili had become something of an antagonist. The reason was her immediate reaction to getting stopped and being unreasonable in her post-fight antics. She got her rematch against Namajunas, but fell short once again, losing a decision to the American.

However, before the second fight, Weili completely changed her outlook and her approach toward fighting. She became more calm, cool, and more calculated. She also added some size to her already muscular physique, which led her into gaining strength superior to anyone in the strawweight ranks. In her last fight with fan-favorite, Joanna Jedrzejczyk, she won by knocking the latter out with a spectacular spinning back-fist which gained a lot of props.

So, how much does someone like Weili, who has always earned her striped and has never failed to put on exciting performances, earn?

How much does Zhang Weili earn?

Her first relatively big payday came out of her fight against Jessica Andrade for which she was paid $180,000 including $50,000 performance of then night bonus and $30,000 fight week incentive.. From here, her graph of earnings kept going up.

In her first fight against Joanna Jedrzejczyk at UFC 248, the China native earned $290,000 including $50,000 performance of the night bonus.

Finally, for her rematch against Jedrzejczyk, she was paid $170,000 as a guarantee.

Therefore, it can be concluded that Weili has earned money just shy of a million dollars throughout her professional career.

The numbers might change after tonight since she is scheduled to fight Carla Esparza for the title. All the fans are looking forward to the outcome of the matchup since it will determine her future pay-days as well as the trajectory of her career.