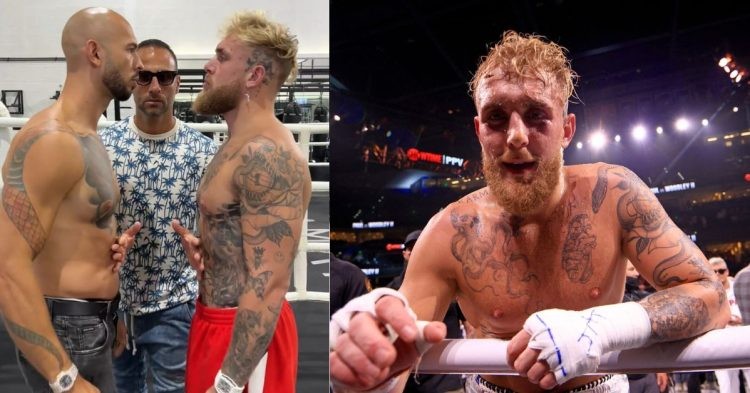 What’s next for Jake Paul after beating one of the greatest mixed martial artist of all time? How can he come back with a bigger fight after having arguably the toughest fight of his career?

Well, Jake Paul has found the answer. And his next opponent is going to be internet sensation, Andrew Tate, who recently got canceled. Andrew Tate is a business and a former kickboxing world champion, who became one of the most famous man on the planet in 2022.

However, because of his controversial opinions on many social issues, Andrew Tate was banned from almost all of the social media platforms.

Well, it seems Andrew Tate is coming back to the world of combat sports with a boxing match against the unbeaten pro boxer, Jake Paul. The Problem Child has some huge wins in his career so far including wins against former MMA world champions such as Tyron Woodley, Ben Askren and Anderson Silva.

Jake Paul and Andrew Tate recently came face to face in a boxing gym and the video was posted by Jake Paul’s Most Valuable Promotion. Jake Paul confirmed that this fight is under negotiations.

The fans certainly are excited about this fight as both Jake Paul and Andrew Tate are two of the most polarising figures on the internet right now.

So far, The Problem Child has been very smart about his fight promotion and opponents. Recently, the Problem Child admitted that the fight against Anderson Silva could only sell around 200-300K PPV buys.

The Problem Child stated that he was disappointed with the PPV sales. And a fight against Andrew Tate can definitely help Paul sell achieve the most PPV sales of his boxing career.

Andrew Tate is arguably the most polarising celebrity on internet right now thanks to his controversial opinion. And fans are certainly going to tune in to either support him or watch him get knocked out by The Problem Child.

Not many fans are aware of the fact that Andrew Tate is a four time world champion in kickboxing. The Top G has won ISKA championship in two different weight division. In his knock boxing career, Andrew Tate has a record of 43 wins and 9 losses.

Andrew Tate has knocked out many opponents inside the kickboxing ring. However, he also has been knocked out and defeated as a pro. And Jake Paul will aiming to hand another KO loss to the Top G in their potential next fight.