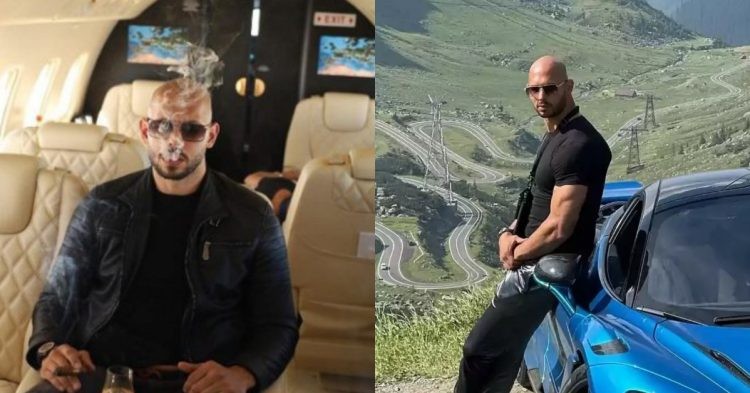 Andrew Tate gives the fans an idea about his true net worth! Tate is currently facing a ban from a lot of the major social media conglomerates. He had a massive presence online before his recent banishment. But it has not stopped the British-American personality from building up a fortune.

The 35-year-old reportedly has a net worth of a whopping $350 million. During a recent Twitch stream with Adin Ross, Tate stated that his actual net worth is much more than that. Once the interviewer asked him the source of his income, Tate just simply replied, “God likes me.”

Former kickboxer Andrew Tate is a hot topic of discussion in the world. From potentially fighting Jake Paul to getting banned by major networks, Tate dominated the headlines in recent months. He has many distractors among online personalities and recently, he got into an ugly fight with British YouTuber, The True Geordie.

Tate recently converted to Islam and True Geordie made some very offensive jokes about that. Although he later apologised, Geordie suffered some serious consequences as he lost a major sponsor.

Even Logan Paul called out Tate for a fight and it looks like Tate is not opposed to it. Tate recently revealed why he has beef with the Paul brothers. However, Tate has not been active lately as a fighter. So how does Tate earn his money? Let’s find out!

How did Andrew Tate become rich from a broke kickboxer?

Andrew Tate was born on December 14th 1986 in Washington, DC. He is the son of the late Emory Tate, who was a chess player and held the title of International Master. While some reports claim Tate had a kickboxing record of 43-9, his Wikipedia suggests that Andrew has a total of 85 fights with 76 wins and 9 losses. However, very little of Tate’s actual income comes from his time as a fighter.

Before his ban from YouTube, Andrew Tate had a big presence on the platform. He had two channels called TateSpeech and Tate Confidential, which supplemented his income. But now that he does not have access to YouTube, fans may wonder what his other sources of income are. According to a report, Tate owns multiple businesses which generate handsome revenues.

It appears that the majority of Andrew Tate’s income is coming from Hustler University. The website describes itself as a platform where people can learn about freelancing, cryptocurrency and how to invest. One can sign up for the courses on the website for a monthly cost of $49.99. The website also claims that it has over 90,000 active users.

He previously revealed that the biggest paycheque of his kickboxing career was only $100,000. Apparently, he did not make his first $1 million until the age of 27. However, he had a net worth of $100 million by the age of 31. Before his YouTube channels were taken down, Tate used to earn somewhere around $10,000 to $80,000 in a month.

Just like the way he earns, Tate also spends money on luxury items. He apparently has a car collection which is worth $20 million. His collection includes Rolls Royce Wraith, Ferrari 812, Porsche 922 and Bugatti Chiron Pur Sport. The Buggati alone cost him $4 million. But perhaps the most expensive vehicle he owns is an Embraer Phenom 300 private jet, which costs upwards of $10 million.

Kyrie Irving’s Pinned Tweet With Mentions of Yahweh, Jehovah, and “All Other Names” Sparks Another Debate Among NBA Fans