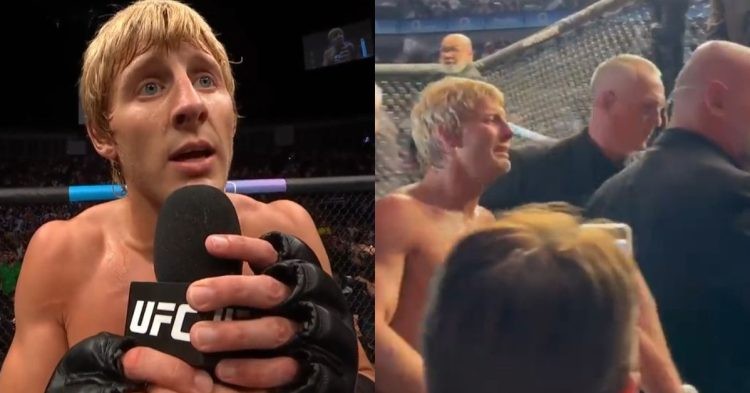 Paddy Pimblett was back in action as he squared off against Jordan Leavitt in a three-round bout that took place on the main card of UFC London: Blaydes vs Aspinall.

The 27-year-old Liverpool native fought in front of his home crowd at the O2 Arena in the United Kingdom and did not disappoint the fans present in the arena as he extended his UFC winning streak to three wins by submitting Leavitt. The crowd erupted as Pimblett finished the fight in the second round via rear naked choke.

This matchup proved to be quite difficult for Paddy the Baddy early in the first round as The Monkey King controlled the British fighter on the ground and dominated him. However, it wasn’t one-sided as Pimblett attempted a guillotine choke and landed some good shots to stun Leavitt late in the round.

Jordan attempted another takedown straightway in the second round but he failed to get in a good position and Paddy smartly converted the fight to his favour and took the back of his opponent and finished the fight.

After winning the fight against Jordan Leavitt at UFC London, Paddy Pimblett became emotional while speaking to Michael Bisping in the post-fight interview. The Scouser delivered a strong message to those suffering from problems and dedicated this win to his late friend Ricky who committed suicide just days before the fight.

“The stigma in this world that man can’t talk. Listen if you’re a man and you’ve got weight on your shoulders and if you think the only way you can solve this is by killing yourself. Please speak to someone. Speak to anyone. I know I would rather me mate cry on my shoulder than go to his funeral next week. So please get rid of this stigma and men start talking.”

Following the post fight interview, Paddy Pimblett could not control his emotions as he broke down into tears while going backstage. It is needless to say that Pimblett was deeply hurt by his friend’s loss and consequently, he does not want anyone to go through the same emotions.

Do let us know in the comments section your thoughts about Pimblett’s emotional post-fight interview.

Paddy Pimblett, as Promised, T-Bags Jordan Leavitt After Choking Him Out in a Thriller at UFC London

Curtis Blaydes’ Fight Purses: How Much Money Has The Razor Earned in His UFC Career?