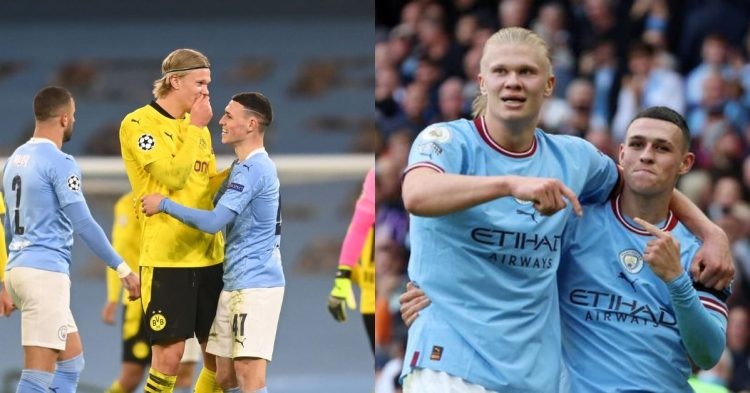 Erling Haaland and his arrival at Manchester City has been a huge success. Unlike previous seasons, City now has a target man. Aguero was a prolific striker, but injury issues and his departure meant that City played a false nine rather than an all-out striker. Even Gabriel Jesus would play on the wing despite being a striker.

Many believed it would be hard for Haaland to get used to City’s intricate play style, as is seen with most signings in the Guardiola era. Haaland has surprised everyone and slotted in wonderfully in the Manchester City team. Phil Foden in an interview said that City’s playing style has not changed much since the Norwegian’s arrival.

Speaking on any change in City’s playing style with the Norwegian’s arrival, Foden said, “I don’t think he has changed our style of play too much. He is obviously more of a target man compared to previous years when we played with a false nine.”

With City not yet playing to Haaland’s strengths, Should the Premier league be worried?

Many expected Haaland to be a prolific scorer at City. But nobody could have predicted the speed with which he has scored 22 goals, and with how much ease he has slotted into the star-studded City side.

“But now we can look for him more, knowing he can bully defenders and run in behind. It hasn’t changed a lot, but it has changed a little bit. He is important for the way we play now.” Erling Haaland might just be the final piece in the puzzle Manchester City needs to win the Champions League.

Manchester City’s possession-based build-up play has always been wonderful to watch. In the previous seasons, City has been accused of ‘one too many passes’ near the opponent’s penalty box. This led them to miss many chances and cost them wins, especially in the Champions League.

Pep Guardiola even commented on City’s lack of a prolific finisher, and that they needed a striker for this season. The arrival of Erling Haaland solved a lot of the Spaniard’s problems. Although City’s possession-based build-up play has not changed a lot, their final ball is always direct. Erling Haaland’s height and strength make it easier for him to be the target man for City’s final ball.