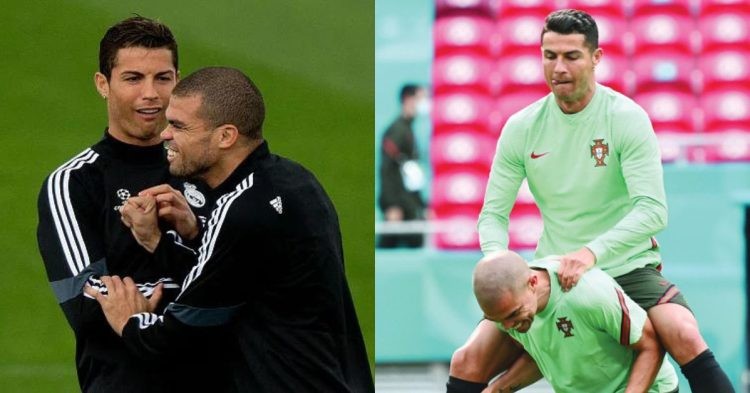 Ronaldo’s interview with Piers Morgan had taken headlines last week, and a lot of negativity surrounded Ronaldo. He even hit back at the press criticizing him for his form. The video released by Portugal’s Instagram shows Ronaldo enjoying his time with his teammates and having a positive environment surrounding him.

Pepe is one of the toughest and most physical defenders anyone has seen. Keeping this in mind, a fan wrote, “Anyone Else Did That and Pepe Would Break Their Legs.” Pepe seems to have been around forever, and a fan commended the Portuguese’s longevity, “The longevity of Pepe is not talked about enough.” Ronaldo would be looking to avoid the same start as Lionel Messi in his World Cup campaign.

Pepe’s real name is Kepler Laveran de Lima Ferreira. He is widely regarded as one of the best defenders of his generation but had been shadowed by some of the centre-backs he has played next to. This has led many to also believe his career has been underrated. This comes despite Pepe having won loads of major trophies throughout his 21-year career.

He started his career at Maritimo, before moving to Porto in 2004. His big break came in 2007, when he moved to Real Madrid, and became a regular starter for one of the greatest teams of the 2010 decade. He went on to make 334 appearances for Madrid. In his club career, Pepe has won three La Ligas, three UEFA Champions Leagues, and two Copa del Rays in Spain. For Portugal, he has won the Euros in 2016.