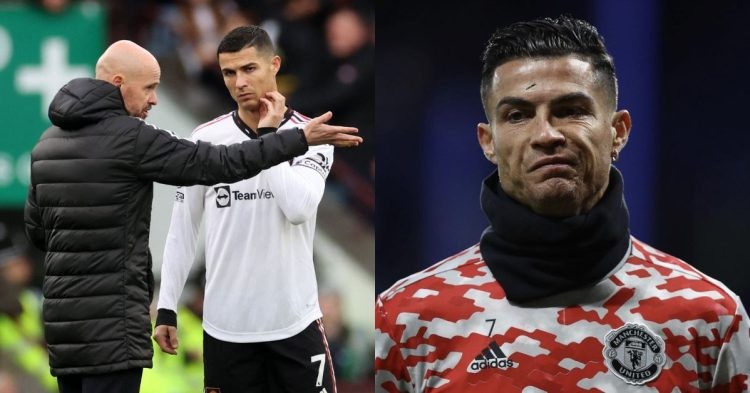 The saga between Cristiano Ronaldo and Manchester United has been going on for a while now. The former Real Madrid star has managed to anger plenty of United supporters, and Erik ten Hag, with his behavior in recent months.

If that wasn’t enough, Ronaldo has once again got on the bad side of his Dutch manager. Recently, an interview with Piers Morgan came to light. In that interview, the Portuguese forward spoke about plenty of things that caught the attention of the entire world.

One of the things Ronaldo said was that he did not respect Erik ten Hag, since he doesn’t respect him. Among other things, it seems like this has contributed to the recent reports that have been emerging. According to ESPN, the Man Utd manager is ready to let Cristiano go, even if it means they don’t find a replacement.

Erik ten Hag has no respect for Cristiano Ronaldo

The reports mention that ten Hag is extremely furious with Ronaldo. It is said that he did not expect the striker to publicly reveal his feelings to the world. In the past, ten Hag has been quite strict about the consequences one has to face if he breaks rules at United.

For example, ten Hag condemned Ronaldo when he left the preseason friendly game against Rayo Vallecano. Once again, Ronaldo did the same in the game against Tottenham Hotspur, which United won 2-0.

Erik ten Hag later revealed that Ronaldo refused to come on against Spurs as a substitute. If we look at the present situation now, it looks as if there has been no developments made in Ronaldo and ten Hag’s relationship. They look to be up against each other. Hence, ten Hag has reportedly taken a decision to let Ronaldo go, according to reports.

Some might argue that it would be a bad idea to let CR7 go since he was Man Utd’s top scorer last season. However, it seems like ten Hag is sure of his decision even if means he does not find a replacement at this stage of the season. If we look at realistically, Ronaldo will leave in January, and United will have to find another striker in the January transfer window.

In the midst of the ongoing saga between ten Hag and Ronaldo at United, a surprise candidate has emerged as a potential replacement. It is none other than PSG superstar Kylian Mbappe. As we all know, Mbappe has made his intention clear to leave PSG in the past. However, he still went ahead and signed a new contract extension with the French club.

According to David McDonnell of the Daily Mirror, United may be eyeing up a deal for the 2018 World Cup winner. Since ten Hag has expressed that he wants Ronaldo to leave, the club will look for another striker in the market. Mbappe’s current market value stands at around $165 million, which fell below Erling Haaland‘s recently. Considering United’s financial capabilities, Old Trafford looks to be a possible destination for Mbappe.