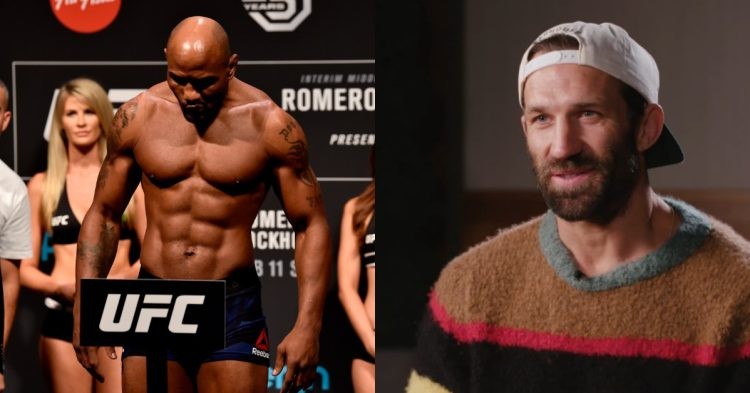 UFC 278 will see the return of former middleweight champion Luke Rockhold. He has been away from active competition since his knockout loss to Jan Blachowicz in 2019. He will fight the no. 6 ranked fighter in the 185lbs division, Paulo Costa.

Luke Rockhold was a very mild-mannered fighter during his initial run in the UFC. He was never the one to light the room on fire with his mic skills. But that seems to have changed ahead of his return fight against Costa. He looked like someone who held back his opinions a lot and is tired of doing so.

During a press conference for the upcoming PPV, Luke was going through his last few fights. One opponent that he definitely held a grudge against, is Yoel Romero. The two fought at UFC 221 in Australia for the interim middleweight championship.

Yoel missed weight for the fight by 2.7lbs. Instead of weighing in at 185lbs, Romero came in at 187.7lbs. It certainly gave him an unfair advantage in terms of the amount of weight he had to cut. The Soldier of God went on to win the fight via KO in the 3rd round of the fight and Luke is still angry about it. He called Yoel a cheater during the press conference.

“Going into 205 (lbs) to all of those things. Fighting Yoel and him missing weight and f***ing you know Yoel, cheating son of a b***h with everything else he’s doing too.” (h/t via Full Violence)

Not only against Luke, but Romero also missed weight against Robert Whittaker at UFC 225. Although Rob was the champ and he beat Romero, it did not count as a title defence because Yoel weighed in at 185.2 lbs. Romero’s mishap robbed Whittaker of a title defence.

Yoel also had a controversial moment early in his career against Tim Kennedy at UFC 178. Fighters are allowed to sit on the stool for one single minute between the five-minute rounds. However, Romero kept sitting on the stool for far longer than 60 seconds which allowed him extra time to recover. The Cuban fighter took full advantage of it and stopped Tim in the first minute of round 3.

He also tested positive for banned substances in 2016, for which he had to serve a six-month suspension. However, in a lawsuit, it was later proved that it was caused due to a tainted supplement. Romero was awarded $27.45 million by the court.

Unfortunately for Luke Rockhold, his opponent for UFC 278 also has a history of missing weight. Paulo Costa fought Marvin Vettori on 23rd October in 2021. Although the fight was set to take place in the middleweight division, Costa made it known that he was not even going to attempt to make the limit of 186lbs division.

After much drama, the bout was then moved to light heavyweight. Although Costa is not the tallest fighter in the division, he is perhaps the most muscular one. Hence, making the weight is not easy for the Brazilian fighter. But, Luke Rockhold has no sympathy for Costa. The 37-year-old called Costa unprofessional for not putting up his end of the bargain.

“I’m not here to fight fu**ing cheaters. If the weight is met (we can fight.) Unless too much wine is consumed, you never know, you know. The weight has to be met. People are trying to take advantages on the game. I’ve killed myself to make weight and do things right. Can’t say the same for the rest. So I ain’t gonna do that again. I ain’t gonna fight a guy that misses weight purposely to gain advantage. F**k no!”