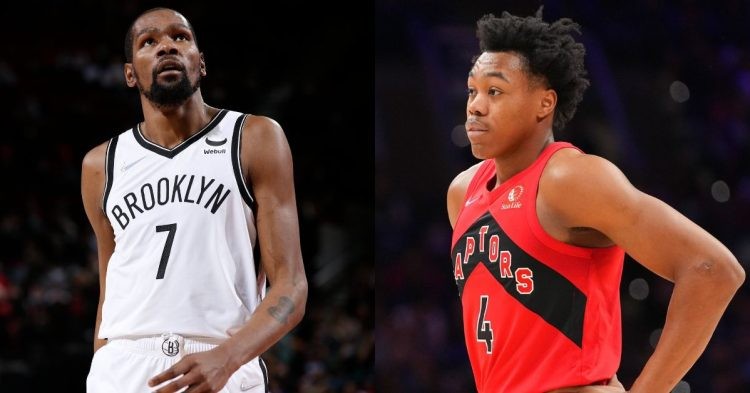 Kevin Durant is currently stuck with the Brooklyn Nets. He submitted a trade request long before he had a meeting with the owner Joe Tsai. After giving him an ultimatum to Tsai had to choose between him and Steve Nash and Sean Marks, Tsai chose Nash’s side.

Since then, it has become evident that KD would be leaving the Nets this summer. However, there still haven’t been any developments on Durant’s trade situation. There have been a couple of teams showing interest in the player, but nothing concrete so far. The Philadelphia 76ers and Boston Celtics were circling the Nets guard but were not able to convince the Nets to an offer.

Recently, an NBA executive has claimed that he would trade Toronto Raptors‘ Scottie Barnes for KD. The statement has surprised many.

Is trading Scottie Barnes for Kevin Durant a smart move?

During a podcast episode, Brian Windhorst spoke to Tim MacMahon and Tim Bontemps. That was when MacMahon claimed, “An executive who I respect said he would give up Scottie Barnes for K.D.”

Scottie Barnes is a young player for the Raptors. They drafted him at the 4th pick in the 2021 NBA Draft. Since then, he has been exceptional for his team. Barnes has averaged 15.3 points, 7.5 rebounds, and 3.5 assists in 74 games during the regular season.

With his impressive numbers, the young star won the Rookie Of the Year award last year. He has fit into the team well, as if he has been in the NBA for years. Does that mean he is worth giving up for Kevin Durant? There is no doubt that he will tempt the Nets board to go for an offer. But his age and potential may be too worthy to let go for the Raptors.

At just 21 years old, Scottie is a player that can reach the skies. If we’re being honest, KD is already at the top. He is still one of the best players on the planet despite his age. If the Raptors want to go for Durant, then a trade involving Barnes and a few other players should do.

But they would have to reconsider since Durant still only has a few years left in the tank at 33 years old. Is giving up a talented 21-year-old for a world-class 33-year-old smart? Many may say the Raptors will go for the move since they want an immediate shot at the title. But they would also have to build a championship-contending team around Kevin Durant. No player can win an NBA championship alone.