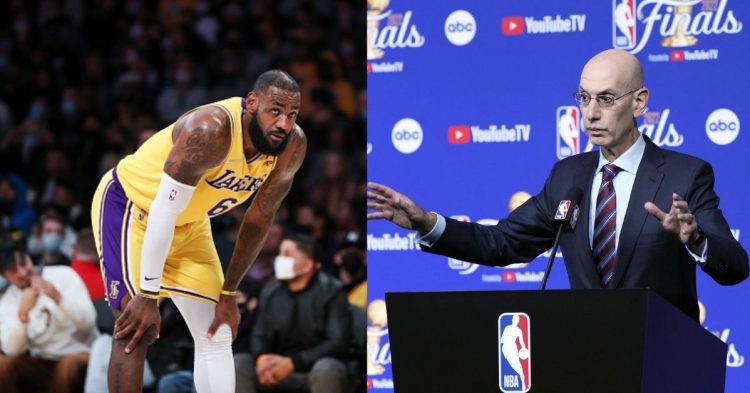 LeBron James is one of the most influential athletes on the planet. His impact exceeds basketball itself and reaches a global level. The Lakers star isn’t one to shy down from an opportunity to share his opinion on a social issue. Recently, he spoke out in support of Brittney Griner, the WNBA star that Russia detained. After he faced backlash, he had to issue a clarification on his words as well.

Many fans said that Brittney took her decision consciously and has to face the punishment. Despite the criticism, LeBron stood by his decision to stick up for her. Similarly, people have also asked why LeBron hasn’t done the same for issues relating to China. Adding on, there has been a common opinion online that he would not come out against the country. The same is the case for Nike and the NBA as well.

The silent treatment of China has been going on for a while. But why is it a big deal now among fans? The main reason is how the country treats the LGBTQ community. Recently, Tsinghua University warned two students. The reason was that they were seen distributing LGBTQ flags.

Why haven’t LeBron James and the NBA spoken out against China?

You may wonder what the reason is for the NBA and Nike’s silence. Well, it is obvious if you think about it. The NBA makes a huge sum of money from China. The NBA is the most watched league in the country. The association often promotes the importance of equality and human rights in the US.

However, they have been silent about what happens on the other side of the world. Although it is quite harsh, it seems like the NBA cares about the money it receives from the country more. When Fox contacted the NBA and a spokesperson for LeBron, there was no response. That says a lot about how they feel about the situation.

Apart from the NBA, Nike has also been quiet about the situation. Just like the NBA, the sports giant has been pretty vocal about the injustice that goes on in America but has done the complete opposite in the case of China. Many reports claim that the reason is that Nike is using the cheap labor that China has to offer.

The bigger issue is that there have been reports of the Uyghur people being forced to work as laborers. And if Nike has chosen to be quiet about this, it puts the reputation of the company at risk.

Enes Freedom has had a go at the NBA for preventing players from speaking out against China. He is an NBA player turned social activist who has never backed down from speaking out in support of justice. This time around, he responded in a video to the leaked audio of NBA officials talking about the Chinese issue.

This hasn’t been the first time that Enes brought the NBA to the light. In April, he tagged billionaire Elon Musk in a tweet and asked him to buy the NBA to prevent the influence of China.

End the Hypocrisy
End the assault on Freedom

There is nothing bigger than standing up for what is right. And if you are going to do that in your country, why shouldn’t you stand up for the right thing in other places as well? It’s only right that you keep up the standards you expect to be maintained.

LeBron James, Nike, and the NBA are parties that should speak up for the right thing in this current situation, as they have always done. They have the influence and power to change things that happen around the world. Or even to raise awareness about it.