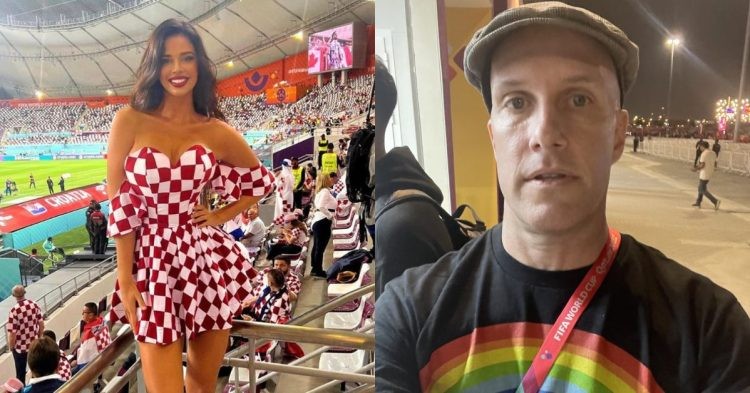 The World Cup in Qatar has had a lot of backlash from all parts of the world. Most European and American fans have voiced their concerns over the location of the World Cup. Qatar has spent north of $200 billion to build stadiums, hotels, and other living quarters to host fans in their country. The middle eastern country has built eight world-class stadiums to host the prestigious tournament.

Alcohol will not be sold inside or around the perimeter of stadiums at the 2022 Qatar World Cup.pic.twitter.com/etougl39HO

Qatar also has a lot of restrictions during the World Cup. Alcohol will not be sold or allowed inside or in the area surrounding the stadium. There are other restrictions regarding dress codes and LGBTQ+ laws. Officials of the country have demanded that fans respect their culture while in the country.

On Sunday, Croatia defeated Canada 4-1 coming from 1-0 down. While Croatia ended Canada’s World Cup, there were other talking points off the pitch during the match. Croatian model Ivana Knoll blatantly defied Qatar’s dress code in the match on Sunday. The model spoke to MailOnline regarding the events that took place on Sunday.

“I was super angry because if I’m not a Muslim and if we in Europe respect hijab and niqab, I think they need to respect our way of life, our religion, and in the end me wearing dresses, bikinis because I’m a Catholic from Croatia who is here for the World Cup.” The model said she did not receive any backlash at the time of entering or leaving the stadium.

Former Miss Croatia Ivana Knoll has been heavily criticised in Qatar for walking the streets of Doha and the stadium in very light clothing.

She has condemned the organisation of the competition as the “worst” and called it a “circus”. pic.twitter.com/cHL7rG5qUA

There have, although been rumors that the people of Qatar asking for her to be removed from the country. “When I arrived, I was surprised they didn’t make any problems about dressing; they allow you to wear whatever you want except in government buildings, which is fine,” she added. She said she was not afraid of getting arrested for wearing outfits similar to the one she wore on Sunday.

American journalist Grant Wahl attended a match wearing rainbow-coloured patterns on their clothes. The journalist was detained for 25 minutes. He later received an apology from a FIFA representative and a senior member of the security team at the stadium. A news agency had asked FIFA to clarify the rules surrounding dress codes at the stadium.

Just now: Security guard refusing to let me into the stadium for USA-Wales. “You have to change your shirt. It’s not allowed.” pic.twitter.com/TvSGThMYq8

FIFA referred to the tournament handbook, which states, “ex-pats and tourists are free to wear the clothing of their choice, as long as it is modest and respectful to the culture.” The rule is not very clear, with Grant Wahl getting detained for wearing a rainbow shirt, whereas Ivana Knoll was not arrested for wearing her dress.

Some German fans have also reported that they were made to remove any rainbow-coloured clothing items. They also said the security officials threw the rainbow flags in the dustbin. DFB later provided the fans with more rainbow clothing, according to CNN.