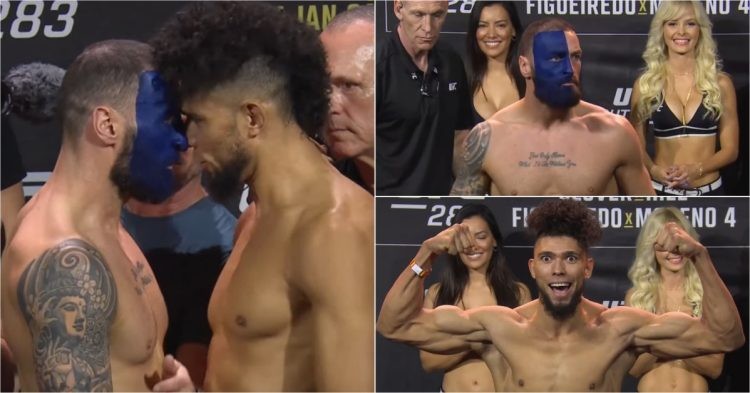 The very first PPV event of the year, UFC 283, will go down this Saturday in Brazil. While it will feature Glover Teixeira vs Jamahal Hill for the vacant light heavyweight title in the main event, Deiveson Figueiredo will face Brandon Moreno in the co-main event for a staggering fourth time. But, the card will kick off with Paul Craig vs Johnny Walker.

Johnny Walker has had a very interesting career so far in the UFC. During his initial UFC bouts, Paul showed his dynamic striking against lower-level opponents. He was thought to be the heir to Jon Jones‘ throne at light heavyweight. However, it all came crashing down when he ran into Corey Anderson at UFC 244.

Anderson brutally knocked Walker out on the feet and showed that the youngster was not ready for a step up in competition. Since the Anderson fight, Walker has 2 wins and 4 losses in his last 6 fights. So it shows that Walker was never able to recapture the momentum he had going into UFC 244. His job is not getting easier at UFC 283.

Johnny Walker will face Paul Craig in the opening bout of the upcoming PPV. Craig is a wild card as nobody can quite expect how he will approach a contest. Craig put up a bizarre display in his last outing to the Octagon at UFC London against Volkan Oezdemir in July 2022. Although he was having some success with striking, Craig seemed unwilling to engage on the feet at times in the fight. So how does the fight go at UFC 283? Let’s find out.

Can Walker knock out Craig at UFC 283?

At light heavyweight, any fighter can knock out the other. Almost all of them have insane power behind their punches. So will be the case in the fight between Paul Craig and Johnny Walker. While Craig is 9th in the division, Walker sits at 12th. So this fight is a big opportunity for Walker to get inside the Top 10 to keep building his career.

Johnny Walker has 15 knockout wins in his career with only 3 submissions. Out of his 26 bouts, only 3 have gone the full distance. So it is quite likely that fans get a result inside 3 rounds on January 21. Although Walker is a good grappler, he would want to avoid tangling with Craig on the ground. Paul Craig remains the only fighter to submit Magomed Ankalaev.

But on the flip side, Craig also has 3 KO losses on his resume. It definitely plays into Walker’s hand. Fans have witnessed Johnny knock out the likes of Ryan Spann, Khalil Rountree Jr, and Misha Cirkunov. So the 30-year-old is more than capable of scoring a big KO against Craig, who has a questionable chin.

In his last fight against Ion Cutelaba, Walker showed his progression and actually finished the bout on the ground. It was a sign of development that he was lacking since 2019. Although he lost via decision against Thiago Santos, Walker showed the ability to avoid big punches and go the full distance. If he can stay on his feet against Paul Craig this Saturday, there is every chance that Johnny Walker walks away with a decision victory or a KO win.